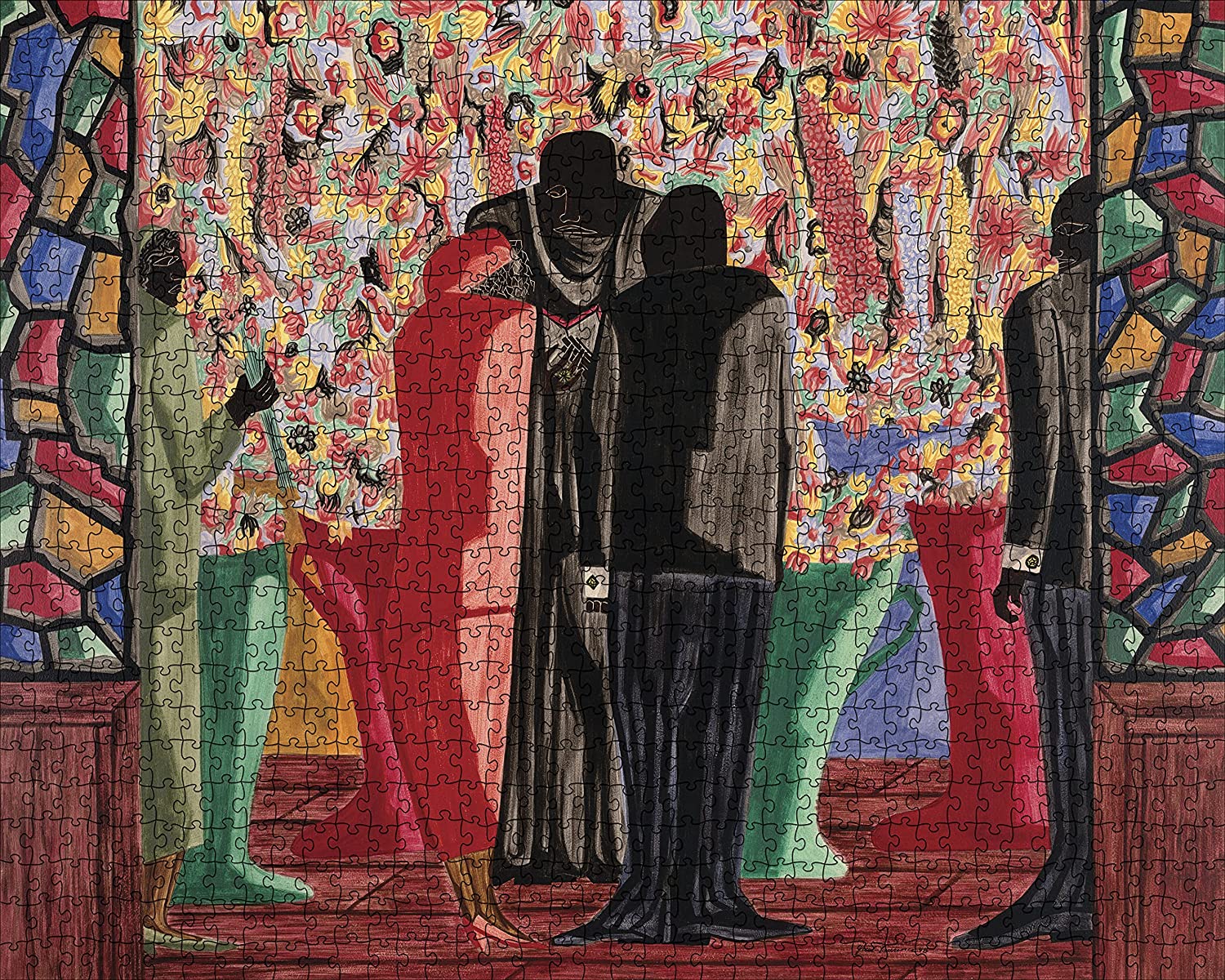 
THREE FOLK MUSICIANS (1967) by Romare Bearden is one of the Virginia Museum of Fine Art’s most prized acquisitions. The large-scale collage was added to the Richmond Museum’s collection in 2016 and with the newfound popularity of puzzles, a 500-piece version of the artwork is now available from the museum’s gift shop. At the Studio Museum in Harlem, the works made by artists Jordan Casteel and Njideka Akunyili Crosby during their residencies at the museum, in 2016 and 2012 respectively, have been transformed into puzzles. Also drawing from their collections, the Metropolitan Museum of Art in New York produced a puzzle based on “The Photographer” (1942) by Jacob Lawrence. The Museum of Modern Art chose an untitled study by Alma Thomas from around 1968 and the Saint Louis Art Museum chose Horace Pippin’s “Sunday Morning Breakfast” (1943).

January is National Jigsaw Month and today is National Jigsaw Day, an opportune time to piece together a masterpiece by Bearden or Pippin or a gem from a new generation of contemporary artists to watch including Casteel , Akunyili Crosby and Derrick Adams. There are many ways to access museum-quality art. A growing selection of puzzles celebrate the work of much-loved black artists:

JACOB LAWRENCES’ painting, “The Wedding” (1948), was acquired by the Art Institute of Chicago in 1993. In its description, the museum focuses on Lawrence’s masterful approach to producing the scene: “Befitting with both the solemnity and joy of a wedding, the composition combines the symmetrical rigidity of the standing figures with an unbridled profusion of stained glass and intensely colored flowers.Made by Pomegranate, the finished 1,000-piece puzzle measures 25 x 20 inches.

In her review of the puzzle, Winfrey noted that FAITH RINGGOLD’s painting pays homage to powerful women such as Sojourner Truth, Harriet Tubman and Rosa Parks. Winfrey added, “I’m proud to say I own the original!”

When Oprah Winfrey released her annual list of favorite things on Amazon, the 2021 selections included a 1,000-piece jigsaw puzzle based on FAITH RINGGOLD’s “The Sunflower Quilting Bee at Arles” produced by Galison. A 1,000 piece puzzle based on the same painting was also made by Pomegranate. The finished size is 27 x 20 inches.

Two puzzles for one, paintings by DreamYard students who were inspired by the work of DERRICK ADAMS appear on the reverse.

From Galison, this 500-piece puzzle is double-sided, featuring a painting by New York artist DERRICK ADAMS on one side with artwork by DreamYard middle school students on the other. DreamYard In School programs serve 45 Bronx schools, providing “arts-based education with systems of social justice pedagogy.” 100% of net proceeds are donated to the DreamYard scholarship fund. The finished size is 24 x 18 inches.

This 500-piece puzzle is based on “Three Folk Musicians”, a large-scale collage by Romare Bearden (1911-1988) acquired by the Virginia Museum of Fine Art in December 2016. Combining layers of hand-painted wallpapers with magazine photographs, the work depicts two guitarists and a single banjo player. When VMFA added the collage to its collection, Michael R. Taylor, chief curator and assistant director for art and education, told Virginia Public Radio, “This isn’t just any Romare Bearden. This has long been considered one of the icons of African American art. The finished puzzle size is 20 x 20 inches.

“After supper the boarders would sit in front of the house and talk, or play checkers, or crank out ‘house music’ on their guitars.”
—Romare Bearden

Some of ROMARE BEARDEN’s most famous works pay homage to jazz and blues. “Up at Minton’s” refers to Minton’s Playhouse, the Harlem jazz club founded by tenor saxophonist Henry Minton in 1938. The club operated for nearly four decades before closing in 1974. The club was revived in 2006 and closed and then returned in 2013 with Richard Parsons at the helm. From Granada, the finished 1,000 piece puzzle measures 20 x 27 inches.

In 1996, the year before he died at age 44, Thurlow Evans Tibbs Jr., an African-American art dealer, historian, and archivist, donated more than 30 paintings by black artists to the Corcoran Gallery of Art. When the museum was closed, the Tibbs collection went to the National Gallery of Art in 2015, including “Autumn Drama” (circa 1969) by ALMA THOMAS. The Washington, DC museum produced a 100-piece puzzle inspired by the painting. It measures 9 x 12 inches when completed.

Puzzle Image: ALMA THOMAS, “Untitled”, circa 1968 (acrylic tape and sticker on cut and stapled paper). | Collection of the Museum of Modern Art, Gift of Donald B. Marron, 299.2015

Exclusive to the Museum of Modern Art (MoMA), this puzzle features Alma Thomas’ study “Untitled” (circa 1968), which was acquired by MoMA in 2015. In its description of the work, the museum notes that “Thomas attached drawings like this to his blank canvases as a guide to composition, a working tool for mapping out his color choices. Done on several pieces of paper bound together with tape and staples, the drawing reflects a development process that allowed for movement and change.The finished 1,000 piece puzzle measures 13.4w x 38.6 inches.

NJIDEKA AKUNYILI CROSBY (born in 1983), “Nwantinti”, 2012 (acrylic, pastel, charcoal, colored pencil and Xerox transfers on paper, 68 × 96 inches). | © Njideka Akunyili Crosby. The Studio Museum in Harlem; Purchase of the museum with funds provided by the acquisition committee and donation of the artist 2012.35

A collaboration between NJIDEKA AKUNYILI CROSBY and the Studio Museum in Harlem’s store, this puzzle references “Nwantinti”, a mixed media painting produced in 2012 during the artist’s residency at the Studio Museum. The title refers to Nelly Uchendu’s popular 1976 version of an Igbo folk song about finding true love. Akunyili Crosby’s work is now part of the museum’s collection. Assembled, the 750-piece puzzle measures 24 x 17 inches.

Known for her portraits, JORDAN CASTEEL was artist-in-residence at the Studio Museum in Harlem, from 2015-16. Casteel’s tenure culminated in a group exhibition with fellow artists-in-residence, where “Kevin the Kiteman” was among the works she presented. The painting is now part of the museum’s collection. This puzzle is a collaboration between the artist and the museum. When completed, the 750 piece puzzle measures 19 x 20.5 inches. The Studio Store also offers a 30-piece children’s version.

This 300 piece puzzle is based on HORACE PIPPIN’s 1943 painting “Sunday Morning Breakfast” from the collection of the Saint Louis Art Museum (SLAM) in Missouri, where it is currently on display. The finished size is 12 x 16 inches.

The puzzle image features a grid of 40 quilts by GEE’S BEND QUILT ARTISTS.

From Galison, this 1,000-piece puzzle celebrates the artistry of the women of Gee’s Bend, Ala., the Pettways, Bendolphs, and more, who have been crafting masterful quilts, abstract textile works of modern and contemporary art, for decades generations. The finished size is 27 x 20 inches.

Described as the matriarch of the historic Gee’s Bend community of quilt artists in Alabama, MARY LEE BENDOLPH collaborated with Paulson Fontaine Press to create this image available as a limited edition in 2006. From Clarkson Potter, the puzzle version consists of 1 000 pieces.

To be released in March, this puzzle follows a limited edition “Equal Justice” published by ESSIE BENDOLPH PETTWAY with Paulson Fontaine Press in 2020, with proceeds going in part to the Equal Justice Initiative. From Clarkson Potter, the finished 1,000 piece puzzle measures 20 x 16 inches. CT

TYPE OF SUPPORTING CULTURE
Do you like and appreciate the type of culture? Please consider supporting its ongoing production by making a donation. Culture Type is an independent art history project that requires countless hours and expenses to research, report, write and produce. To help support it, make a one-time donation or sign up for a recurring monthly contribution. It just takes a minute. Thank you very much for your support.

What if brands were true to their names?