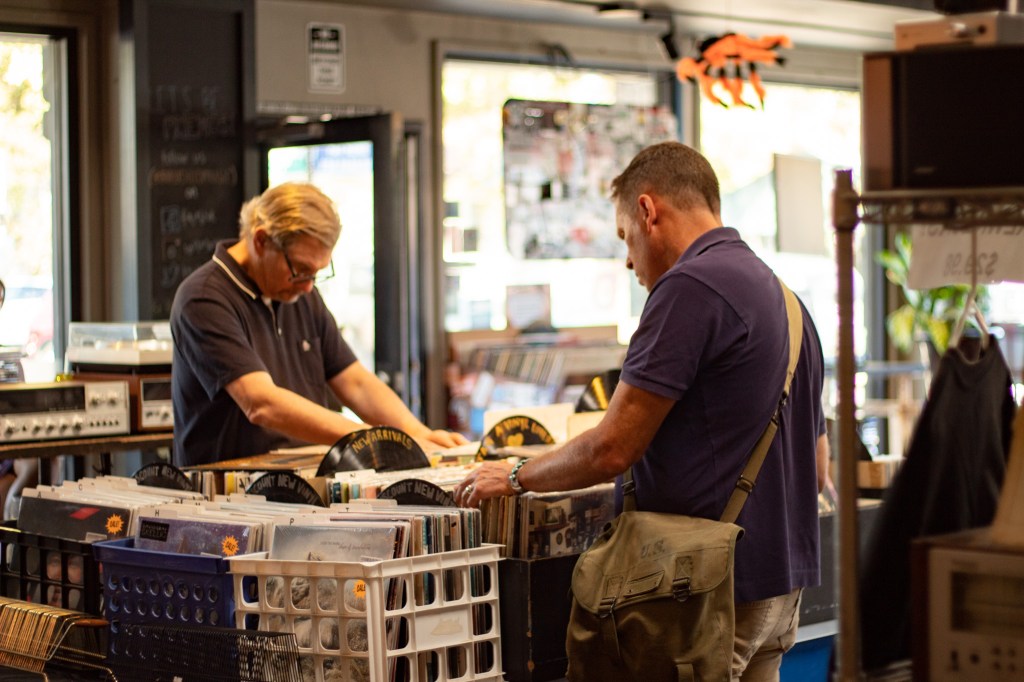 With vinyl record sales skyrocketing in recent years, stores like Davis’ Armadillo Music – located at 207 F St. – have tried to capitalize on the moment by making their business more appealing to a younger generation while also holding on to what makes them special for nearly three decades.

The music store celebrated its 26th anniversary this month, underscoring its continued ability to evolve in the ever-changing music industry while maintaining a loyal customer base.

Matthew Schneider, a regular customer and current DJ at KDVS of Davis, a student-run community radio station, said Armadillo is a great place to get used records and collections that are hard to find elsewhere.

“So even with the rise of the internet…you can still find amazing treasures,” he pointed out.

Schneider has lived in Davis for 12 years and says he appreciates that the music store offers listening stations for customers.

“Generally they want to make sure people have a good musical experience,” he said.

“It was on hiatus during the pandemic, but we’re looking at year two resuming coming in May,” Schneider pointed out.

Oakland resident Jeff Hollinger found himself visiting Armadillo Music whenever he visited his daughter, who lives in Davis.

Hollinger slipped away from his father-daughter time for 15 minutes after lunch to see what the record store had to offer this visit.

“They have a nice selection and nice people who are always happy to see you in,” he pointed out. “It’s centrally located here and a lot of students now go to record stores. Prices are really good here even though record prices have gone up.

Nick Rocci, deputy manager of Armadillo Music, said the store has always tried to find ways to make the store more welcoming to people of all ages and backgrounds.

“The big goal is to make the record store a community space where you hang out and hang out for a few hours,” Rocci explained.

With that in mind, the record store opted to open a small bar in the back corner of the store just months before the COVID-19 pandemic, where people could come and drink while listening to curated music.

“That’s the whole point of the bar,” added Rocci. “Bringing people together more than making money.”

However, the bar was forced to close shortly after opening due to the pandemic and reopened late last year.

Erik Gaumer, who dubbed himself the “beerista” (bartender) of The Bootleg, said working as the store’s bartender brought him joy thanks to the many people he met.

“It’s kind of like the living room in downtown Davis, you know,” he explained. “You sit down, drink a beer, listen to music, relax and that’s what we’re here to do.”

Gaumer added that The Bootleg is not a “party” place, but rather a family place where everyone feels welcome.

“We serve alcohol, but we also serve non-alcoholic beverages and just try to make sure everyone can enjoy it while they’re here,” he said.

According to Gaumer, the bar now offers six local beers and a selection of cans and bottles.

“We want to make sure we get a lot of good stuff from the locals,” Gaumer said of the beer selection.

He noted that the bar only makes 40 pours of a certain beer and then tweaks it to keep the experience “always changing.”

Additionally, the bar hosts weekly in-store events, including Tuesday’s Turntable Takeover, which allows customers to bring in their favorite records to play while enjoying a drink.

The Bootleg is open whenever Armadillo Music is open, but Gaumer noted that a bartender won’t always be available to serve drinks.