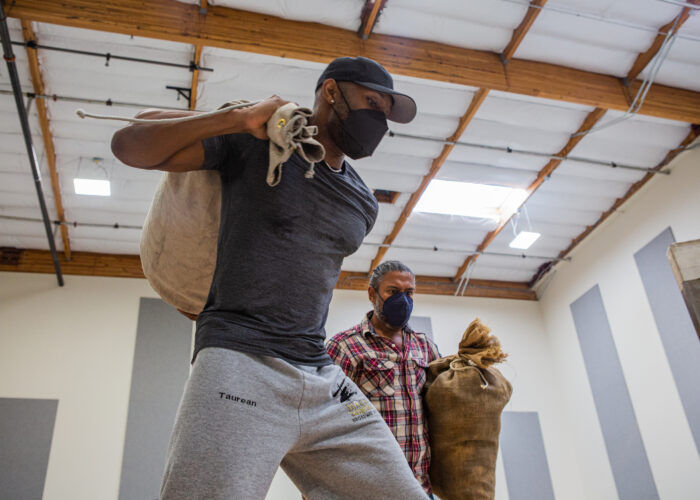 The Berkeley Repertory Theater is finally considering raise the curtain on the world premiere of the Avett brothers-inspired musical “Swept Away” on Sunday, January 9, after more than a year of pandemic delay.

The good news? Demand for tickets is so high that the show has already extended its airing twice, with the intention of occupying the company’s Peet’s Theater until March 6.

The bad news? Well, just check out the headlines.

During rehearsals the first week of December, the production’s Tony Award-winning director Michael Mayer said, “We’ve crossed all of our numbers.”

As the highly mutated omicron variant of the coronavirus gained traction across New York City and shut down Broadway shows – including Mayer’s revival of “Little Shop of Horrors” at the Westside Theater after an actor tested positive for COVID -19 – the director said he still feels optimistic about the opening date of “Swept away.” But if he’s learned anything from the past two years, it’s to be flexible.

“Swept Away” was originally scheduled to premiere at Berkeley Rep in June 2020, with a screenplay by another Tony winner John Logan and a sheet music from the Avett Brothers catalog, in particular the 2004 LP of the North Carolina folk-rock group, “Mignonette”.

â€œFor me, this is an opportunity for musical theater fans to be introduced to or deepen their appreciation for the work of the Avett Brothers,â€ said Mayer. “It’s also an opportunity for their fans to come and listen to these songs in a new context, sung in a different way, and in relation to other characters.”

The idea for a drama built around the music and lyrics of the Avett brothers was brought to him by screenwriter John Logan, whose Broadway production of a “Moulin Rouge!” The musical was also mired in COVID protocols.

â€œWhat impressed me the most about the music of the Avett Brothers is the range, from toe-clapping banjo music to soaring spirituals to intimate love songs,â€ Logan said. â€œIt gave me the widest range of colors. The process of going through it and choosing the songs was arduous, but it was joyful. “

The new musical is set in 1888 and follows a crew of four castaways, including two brothers, who try to survive off New Bedford, Mass.

The production stars John Gallagher Jr., Stark Sands, Wayne Duvall and Adrian Blake Enscoe, with choreography by David Neumann. It lasts a little over 75 minutes, without an intermission.

â€œWhen you’re dealing with starving people in a lifeboat, you can’t send people out for a hot dog and a margarita,â€ Logan said. â€œIt’s not a light show. There aren’t a lot of tap dancing. It’s the anti-Moulin Rouge! “

The story resonated with the Avett brothers as well.

“There are many times that I am up there where I embody this companion going through an evolution in life, of love and pain and joy and suffering,” Scott Avett told The Chronicle. by phone, calling from his home in North Carolina. â€œObviously Broadway takes the magnifying glass and puts it up close. I am so moved to see it build.

Even though he started writing “Swept Away” in 2017, Logan said experiencing the COVID-19 pandemic only deepened his context.

â€œFor all its intensity, it’s a story of redemption and finding grace in really difficult circumstances,â€ he said. â€œIf anything, what we’re going through is finding favor under impossible circumstances. It’s the perfect show at the moment.

Mayer said there is already widespread interest, both in the world of musical theater and indie rock, with tickets being purchased from people in 42 states.

And, he noted, none of the fans will be disappointed.

â€œJohn really placed the songs with extraordinary care and a deep understanding of them,â€ Mayer said. â€œThey are never reserved spaces. In those jukebox musicals, it can sometimes seem random. It is not like that. It positions them so that you can really hear them.

The Avett brothers were more than willing to see their work in a new creative context and even recorded a new version of the title song, “Swept Away â€, with siblings Scott and Seth Avett on banjo and acoustic guitar and teammate Bob Crawford on double bass. A video of the song was shot for Berkeley Rep’s Ovation Gala.

“When we were discussing anything with the writers, cast and crew, it was obvious that it was in the hands of a group that wouldn’t let anything come out less than excellent – and I do watch out for that word, â€Avett said. “As an artist, this is probably the ultimate compliment and the ultimate praise for our work.”

For Logan, the approval of the project by the Avett brothers was the one that really mattered.

â€œIt could have been a very short reunion,â€ he said, â€œbut one of the things that got them most excited was that other artists were taking inspiration from their work and presenting it to a new audience. . “