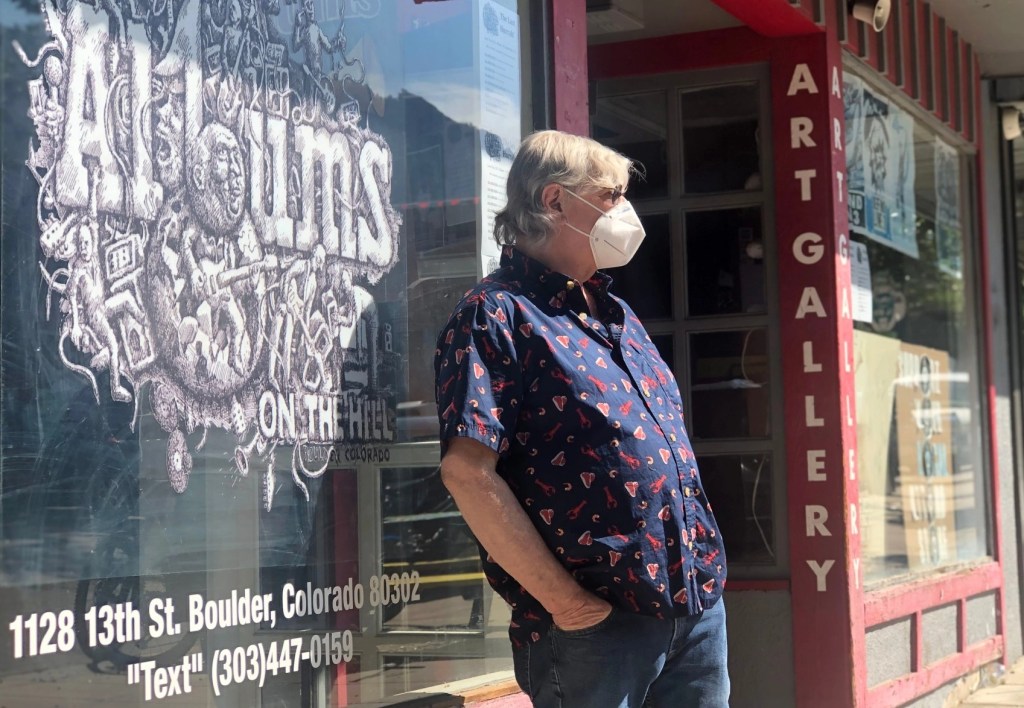 Andy Schneidkraut has owned Albums on the Hill for 35 years. But after Labor Day, the longtime Boulder’s University Hill record store will close for good – and many music enthusiasts took the time to stop over the holiday weekend and say goodbye.

“I saw people I hadn’t seen in years,” Schneidkraut said, citing friends, family and clients who have come to Boulder from as close as Longmont to as far away as Massachusetts.

The decision to close is not a business issue, Schneidkraut said, but a health issue. After undergoing both a kidney transplant and heart surgery in the spring, Schneidkraut said he realized it was time for him to take a step back.

“Sometimes you don’t want to let go, but the decisions are forced on you,” he said. “I’m at the point where it’s not a good choice for me to die behind the counter.”

This weekend, for the first time since Schneidkraut temporarily closed the store in April to focus on his health, Albums on the Hill is open to the public for a “last hurray.” Almost all items are heavily discounted throughout the weekend, from DVDs to tapes to books.

The turnout was “incredible,” Schneidkraut said.

“It’s always interesting to find out how much you mean to people when you don’t know if you mean that much to yourself,” he said.

Schneidkraut said the next step is figuring out what to do with Albums on the Hill’s vast and eclectic collection of media. He would rather sell the business to someone who would keep it as a record store, he said.

There are a few other record stores remaining in Boulder County, including Paradise Found Records & Music on Boulder’s Pearl Street. Albums on the Hill are special, however, said Boulder resident Alyssa Boback.

“I’ve never been to such a welcoming record store,” Boback said.

Boback is one of many customers who flocked to the store for its last weekend. Andrew Pineda, a University of Colorado Boulder alumnus who lives in Fort Collins, has been a dedicated Albums on the Hill customer for more than 10 years.

“As soon as I saw the store was closing permanently, I told my wife that somehow we were going to Boulder for the weekend,” Pineda said.

While there are record stores closer to his Fort Collins home that Pineda could frequent, he said he appreciates how older community staples like Albums on the Hill can bring music lovers together. the region. “New stores don’t have the same gravity,” he said.

Pineda also said he liked Schneidkraut’s personality. He remembers when Schneidkraut gave him a special version of “Sister Cities,” the 2018 album by Pineda’s favorite band, The Wonder Years.

“That kind of thing only happens when you’re close to the owner,” he said.

A few former employees who still live in the neighborhood volunteered to work this weekend to support the store one last time. Courtney Law, who worked at Albums on the Hill in 2004 and 2005, said she was happy to visit him from his home in Denver to help Schneidkraut close his shop.

“This store means so much to me,” Law said. “It’s truly an honor to be able to help.”

Law said that while part of her knew Schneidkraut couldn’t run the store forever, the news of her closing was still bittersweet. She hopes whoever moves into the space next will, at the very least, respect her history as a beloved bulwark of the Boulder music scene.

“Record stores have always been community hubs,” she said. “It’s a universal experience to be moved by music.”

Subscribe to our weekly newsletter, In The Know, to receive entertainment news straight to your inbox.