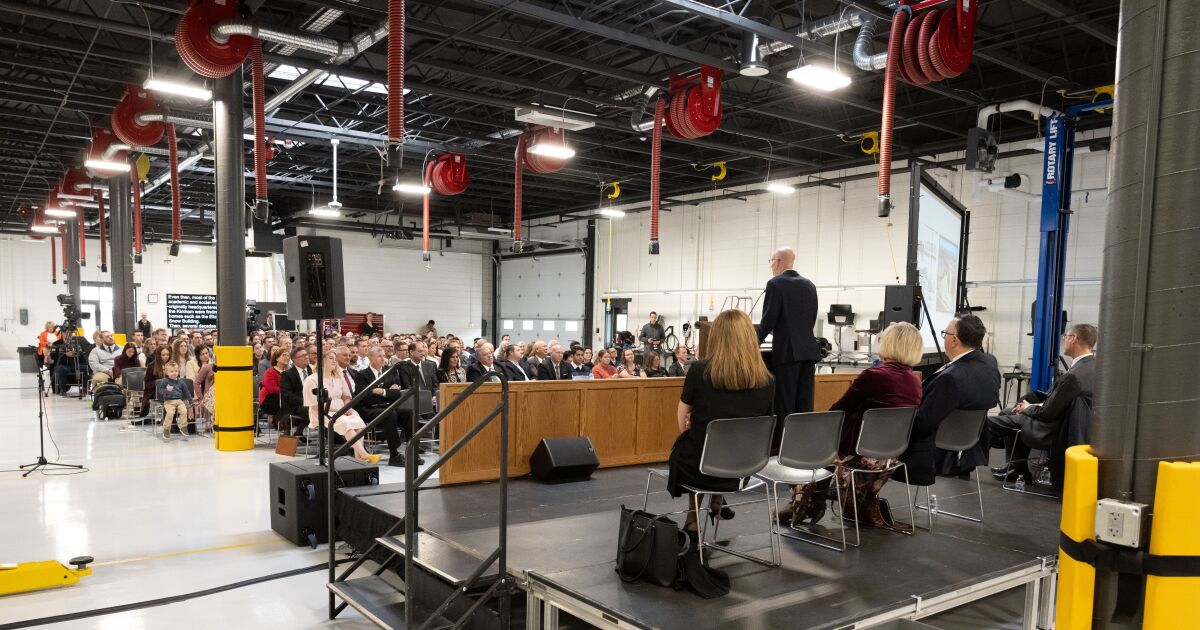 BYU-Idaho President Henry J. Eyring played a dual role during dedication services for three new additions to the Rexburg, Idaho campus on Thursday, Oct. 27: as college president and as sixty -ten of region.

During the ceremony, the university president shared history, perspective, and advice to students, faculty, and guests, and offered the dedicatory prayer for the Visual Arts Studio, Engineering Technology Center, and the University Village Community Center.

After describing the many features and resources the new buildings will bring to campus, President Eyring noted that he couldn’t help but compare these amenities with what his family experienced when they first moved to Rexburg at the summer of 1971.

His father, President Henry B. Eyring of the First Presidency, had agreed to serve as the 10th president of Ricks College, the university’s predecessor.

As the university grew, accommodation was difficult to find, and the family – which included three energetic young boys – first moved into a single wide trailer provided by the university at the edge of campus.

“My mother never complained about the overcrowding or the heat inside the caravan. She knew we were in the right place,” President Henry J. Eyring recalled.

Today, Church tithepayers are generously paving the way for growth that will likely continue in on-campus and online enrollment.

Students began using the 8,800 square foot facility on the northeast corner of campus in spring 2021. The building and adjacent parking lot replace the former Oscar A. Kirkham Building, which was demolished in August 2019.

During the dedication service, President Eyring honored the old Kirkham building, which is named after Oscar A. Kirkham, who taught music at Ricks College from 1903 to 1906 and later became general authority as a member of the First Council of Seventy. .

The building was completed in 1959. It has hosted many high profile speakers in its 900+ seat auditorium, including former first lady Eleanor Roosevelt on March 2, 1959, and its large stage has facilitated numerous dance productions and theatre.

“The renowned artists of Ricks College’s days—as well as those of today—would be jealous of the resources and space we dedicate now,” President Eyring said of the new facility.

In addition to two large classrooms for sculpture and ceramics lessons, there are changing rooms for storing projects, a hall that doubles as a gallery, and a storage area equipped with kilns, clay and other stationery. There is also space for a pyre and a metal foundry for sculpting bronze.

With ribbon windows on the east and west walls, a skylight above the foyer, and floor-to-ceiling windows on the north side, the building is flooded with natural light, perfect for showcasing compositions.

In the dedicatory prayer, President Eyring prayed “that the light of your Holy Spirit may also shine, illuminating the works of creative art rendered therein.”

Brian Memmott, dean of the College of Performing and Visual Arts, noted that as an alumnus of the university, he was immensely blessed studying art under the tutelage of a dedicated faculty.

“The buildings where I grew up and learned my calling have become sacred places,” he said. “My prayer is that this happens for the students who come here to these buildings as well.”

When Greg Roach, dean of the College of Physical Sciences and Engineering, was first asked to serve as department chair in 2011, about 415 students were majoring in construction management, zero in civil engineering, and 125 in engineering. automotive technology. Today, there are 960 students in construction management, 305 in civil engineering and 490 in automotive technology. “That’s impressive growth,” Roach said.

The new Engineering Technology Center will provide much-needed classrooms and labs for students seeking training and management experience in these programs.

The 34,272 square foot facility was formerly known as the Auxiliary Services Building and opened in 1974. It housed stores and reception, university press, surplus and mail services. Following a thorough renovation, the building now includes:

In the dedicating prayer, President Eyring noted that students studying construction, automotive, and engineering sciences are transforming the physical world to help alleviate poverty and advance productivity and comfort. physical.

“We bless these walls to protect those within from outside harm and influence, for they literally build a better world,” President Eyring said.

Roach expressed his gratitude to the architects, construction workers, engineers and others who helped build “these magnificent facilities.”

The new community center will serve as a gathering place for families and children living in the married student housing community at the University Village campus.

“This building was intentionally constructed so that University Village tenants would have a location outside of their apartments to take them out,” explained Kyle Williams, general manager of university operations, “for special occasions, religious functions, family gatherings, group gatherings, studying, exercising, social interaction with friends, barbecues and fire pits, and playing with families and children.

President Eyring blessed it to be “an extension of homes and a place of holiness and happiness, where eternal families can be built together.”

The vision is for it to be a place where families, children, employees and guests can laugh, cry, study, learn, teach and share testimonies of Jesus Christ, Williams said.

Thursday’s inauguration program was led by Jon Linford, vice president academic, and featured music from the BYU–Idaho Collegiate Singers, who sang “Savior, Redeemer of My Soul.”