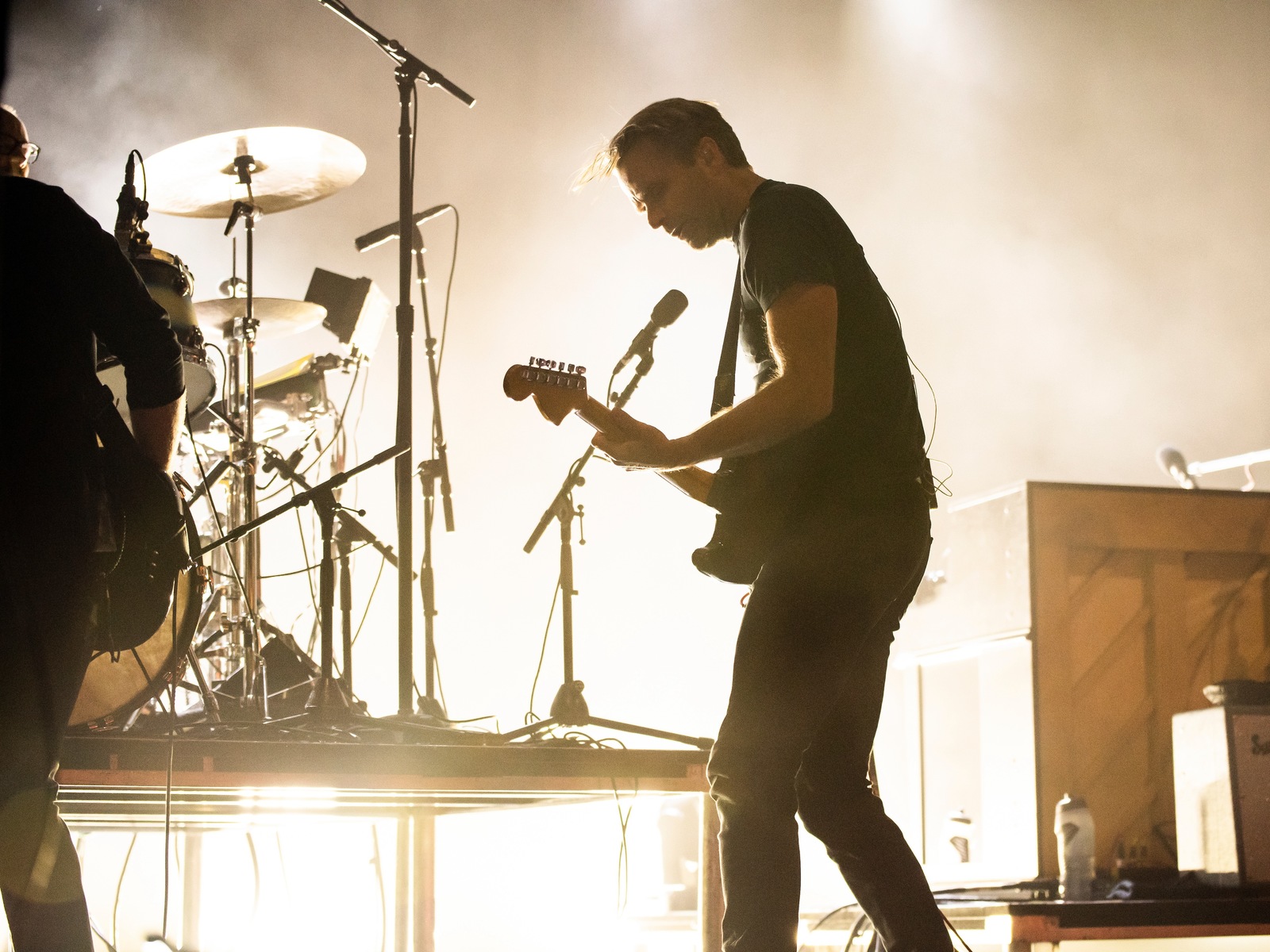 Death Cab for Cutie capped off a string of memorable performances at the Generac Power Stage on Saturday night, giving fans one hell of a show to close out Summerfest.

Their performance showcased a treasure trove of gems, including fan favorites from albums that span over two decades. But frontman Ben Gibbard and his bandmates also delivered new takes, well-executed experimentalism and a few new songs during their memorable 90-minute set.

Sound issues plagued the set’s first two songs — “I Dreamed We Spoke Again” and “Summer Years” — with a buzzy base clipping Gibbard’s silky vocals. But by the time they burst into “The Ghosts of Beverly Drive,” a spirited meditation on the baggage often carried in new relationships, the sound team had effectively smoothed over the issues, paving the way for Gibbard and the team up to pick up the pace with “Long Division,” a fast-paced track that uses mathematical metaphor to tackle the deep-seated feelings of living as an outsider.

It struck me listening to the cerebral lyrics that the band have come a long way since their debut album “Something About Airplanes” was released in 1998. And yet, there is so much about them that has remained consistent. For me, part of Death Cab’s appeal has always been their down-to-earth vibe – even live, the band has the stereotypical Seattle coffeehouse look – and thought-provoking lyrics. This is undoubtedly one of the reasons why their confessional albums have somehow, despite the passage of more than two decades, aged as well as they have.

This became abundantly clear when Gibbard released the tune “Photobooth” from the proverbial “time machine”. The song, released 22 years ago on the album “We Have the Facts and We’re Voting Yes”, could have been written yesterday.

Gibbard was friendly throughout the show, regularly thanking the crowd for listening, but also engaging them with more personal banter.

“It’s always good to be back here in Milwaukee,” he said, after a performance of “Blacking Out the Friction.” “I have fond memories of the first time we played here at the Cactus Club in August 1999 [ …] This is dedicated to the six people who showed up.

And with that, he burst into a moving performance of “I Will Follow You Into The Dark,” a darkly beautiful ballad that addresses both the loss of faith and the passion of a relationship that transcends dead.

As he sang, fireworks erupted in the background, the explosions marking a distinctive contrast to the lyrics. Gibard stopped. “I think this may be the first time we’ve been interrupted by fireworks,” he said with a chuckle, ending the song as the crowd sang excitedly, the fireworks artifice resounding like bombs in the distance.

Little was predictable about the gig, including a rendition of the popular “I Will Possess Your Heart” that featured a memorable intro with gritty distorted guitar that reinforced the song’s inherently creepy feeling (it’s basically the ballad of a stalker).

Emotions ran high during performances of “Cath…” and “Northern Lights,” a track that serves up poignant and harrowing teenage scenes worthy of a John Hughes movie thanks to lyrics like “We shared a cigarette with cloves / On the parapet / As the televisions shone from the windows of the model houses.

Gibbard was in constant motion throughout the 90 minute performance. His shoulders swayed, his feet bounced, and he frequently propelled himself across the stage, often backwards, brandishing his Fender Mustang with bristling punk rock energy.

That energy was evident during heavy hitters like “Title and Registration” and “Crooked Teeth,” a spiky, fuzzy-toned guitar track. In fact, the talent of the entire quintet, which included bassist Nick Harmer, lead guitarist Dave Depper, drummer Jason McGerr and keyboardist Zac Rae, was evident throughout the tight and lively set.

The Summerfest performance marked the fifth show of their Asphalt Meadows 2022 tour, which intersects with the release of their tenth studio album on September 16.

As a result, the set also included two new singles. The first was the recent “Roman Candles,” a pandemic-fueled anthem in which Gibbard sang, “I used to feel it all like a flame/Now it’s a struggle to feel anything/ Watching the world from a window on a hill / Everybody moving while I stand still,” before the band broke out into a cacophony of distorted noises, reminiscent of 80s shoegaze, including drums that mimicked the fireworks for which the song is named.

The second was “Here to Forever” which will be released on July 13.

It seemed like the night would end with “Bixby Canyon Bridge” and its maelstrom of swirling synths and screeching guitars. But, after the band left the stage, guests were treated to a rare reminder of Summerfest.

Moments passed before Gibbard returned to the stage, grabbing his guitar and launching into the catchy “You Are a Tourist.” This was followed by the heart-pounding ‘Soul Meets Body’, after which Gibbard stood tall with his Gibson Acoustic Ax held high as the crowd roared with praise and applause.