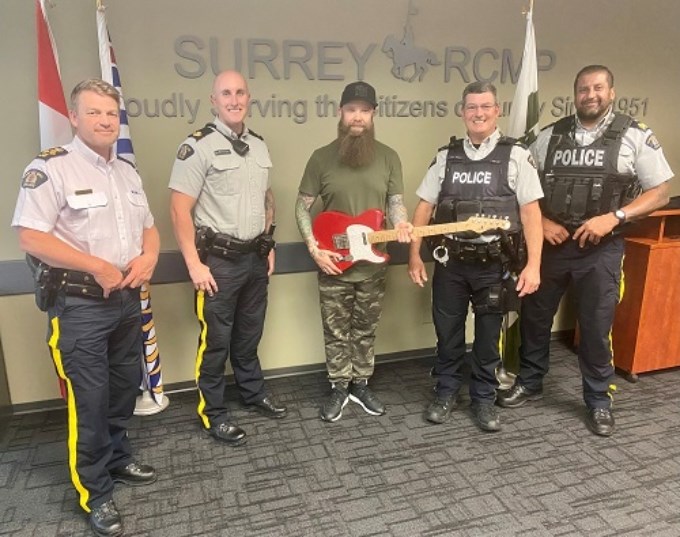 A guitar stolen in 2007 in the Lower Mainland was found 15 years later.

At the time, the guitars were valued at around $25,000. Cpl. Bob Keay was able to recover three guitars at the time and two more were recovered by Ridge Meadows RCMP and Vancouver Police.

On July 6, Merrett called Keay, stating that he believed he had found one of his guitars for sale online at a Vancouver pawn shop. Surrey RCMP officers attended the pawnshop the following morning, where they confirmed the guitar belonged to Merrett and seized it. The guitar was then returned.

This guitar had significant sentimental value to him as it was a gift from his father. “It’s like getting a piece of my soul back,” Merrett said in the press release.

Merrett never gave up hope of finding his guitars, and he continues to scour the advertisements, keeps his purchase receipt, keeps the certificate of authenticity, and even has the email correspondence between him and Cpl. Keay in 2007, which made it easy for the RCMP to recover the guitar.

Merrett has several guitars that are still in circulation. If you think you have one, contact the Surrey RCMP, and the police can check to determine if it was stolen or not.


To contact a reporter for this story, email Carli Berry or call 250-864-7494 or email the editor. You can also submit photos, videos or news tips to the newsroom and be entered to win a monthly prize draw.


We appreciate your comments and opinions on our stories, but play well. We will not censor or delete comments unless they contain off-topic statements or links, unnecessary vulgarity, false facts, spam or obviously fake profiles. If you have any concerns about what you see in the comments, email the editor in the link above.

Starting Monday, you will pay GST on these products

Elvis Biopic earns over $100 million at the domestic box office