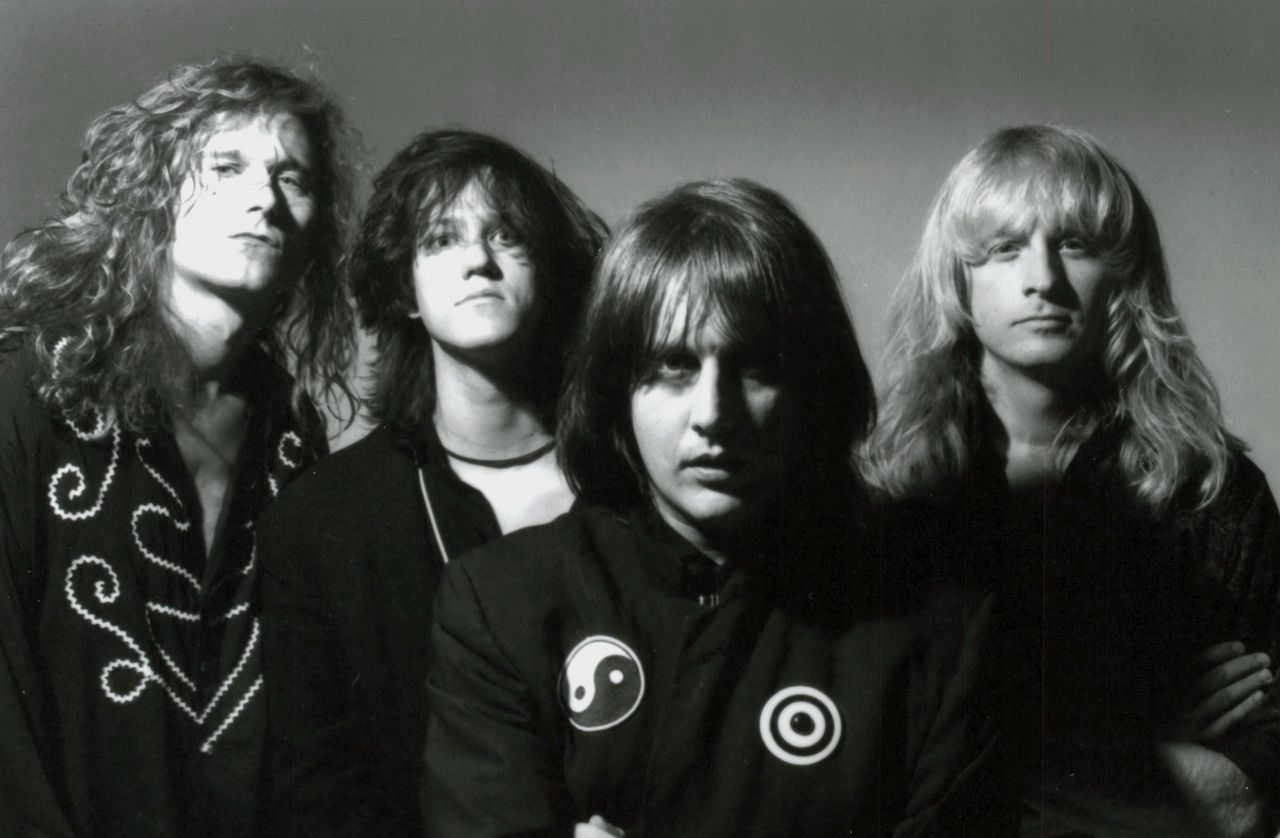 Hang out with Cindy Crawford on MTV. Rockin’ on “Late Night with David Letterman.” A few music videos in regular rotation. Dressing like a long-haired musician from the early 90s should do it, with hats and trench coats sometimes involved.

Such was the life of singer, guitarist and songwriter Kevn Kinney in 1991, after his band Drivin’ N’ Cryin’s final album ‘Fly Me Courageous’ connected in a much bigger way than their previous three . Songs like the electrifying title track and single “Build a Fire” were perfectly suited to this era. The hard rock/metal that ruled the previous decade gave way to the alternative sounds that would shape the next. Kinney wrote some cool guitar riffs, much like Guns N’ Roses’ Izzy Stradlin did. But he also sang original lyrics in a vulnerable way, in the style of REM frontman Michael Stipe.

But for Kinney, this newly accessible stratosphere didn’t feel right. Or familiar at all. Back in high school in Milwaukee, Kevin Kinney (he later cut the “i” off his first name, professionally) weighed 300 pounds. He was a member of his school’s drama and science fiction clubs. He later started playing music in rock bands, before moving to Atlanta, where Drivin’ N’ Cryin’ formed. Along the way, Kinney lost about 160 pounds — going from a height of 44 inches to 27 in a year or two — doing a lot of speeding.

drive and cry takes a well-deserved lap of honor

After the hit of “Fly Me Courageous”, “All of a sudden, people loved me,” Kinney now recalls. “And the 300-pound me is watching me say, ‘What happened? “” When he was growing up, Kinney said, “I couldn’t communicate with sports people and people who were popular. And it’s people now who are clamoring to say hello and stuff.

Kinney is quick to add, “But that’s typical rock singer stuff. Michael Stipe has the same story. I mean, we all have this story, that we’re all strangers. It’s a bit like comics that are part of all our lives. But while Michael embraces that kind of stuff and is really great at it, Chris Robinson (of The Black Crowes is) really great at it, they embody this rock star stuff, I never wanted that. And it’s very uncomfortable for me.

After signing with Island Records – the same label as U2 and Bob Marley – Drivin’ N’ Cryin’s next two albums did not budge commercially. Oh, the music and songs were cool. Especially the 1989 album “Mystery Road”, which showed the band’s talent for mixing electric rock and acoustic country/folk.

Kinney’s delightful 1990 solo debut, “MacDougal Blues,” made with REM guitarist Peter Buck, didn’t light up the cash registers either. Drivin’ N’ Cryin’ opened for Georgian band REM in 1989. Buck was originally hired to produce “Mystery Road” before Island put a stop to it. Drivin’ N’ Cryin’ first made waves with a punk-tinged debut album in 1986, “Scarred but Smarter”, released via local independent label 688 Records, and playing gigs in small bars in the South is.

THE group had made a video for the excellent anthem of “Mystery Road” “Honeysuckle Blue”. But this clip was not very popular with television programmers. “There were a lot of bands that were on MTV,” Kinney says. “And there was a lot of pressure for us to do it. There was pressure to be on the radio. It was back when the record companies gave you three or four albums, just to make your story basically, that’s what they called it.

But after 1987 LP “Whisper Tames The Lion” peaked at 130 and “Mystery Road” and “MacDougal Blues” failed to chart, the pressure was on “Fly Me Courageous”. “If it doesn’t go well,” Kinney recalls, “we pretty much have to call him. It was pretty much sink or swim.

Drivin’ N’ Cryin’ – whose lineup then consisted of Kinney, bassist Tim Nielsen, drummer Jeff Sullivan and guitarist Buren Fowler – decamped to Statesboro, Georgia. Instead of local music The Rocking Eagle, they jammed and worked on gear. Different producers were flown in. These included two English studio wizards: Andy Johns, who had worked with the likes of Zeppelin, the Rolling Stones and Van Halen; and Geoff Workman, whose credits included The Cars, Queen and Journey.

The gig went to Johns, who Kinney said had good ideas for the album. The band also vibed well with Workman, and Kinney hated having to call him and tell him they were going in another direction. Drivin’ N’ Cryin traveled to Memphis, to record at Kiva Recording Studio, where Joe Walsh and Isaac Hayes had recorded. The day before the sessions began, Johns called Kinney on the phone. Johns told Kinney he was going to rehab. Kinney asked if they needed to reschedule the sessions. But Johns replied that he “just wasn’t going to be able to do it”. Island Records asked Kinney to call Workman back and tell them they now wanted him to produce the album.

Kinney recalls it being a hot summer in Memphis during the “Fly Me Courageous” session. The group stayed at a local Holiday Inn. In his motel room, Kinney set up a track for miniature slot cars. At Kiva Studio, Kinney met a young folksinger named Todd Snider who was to become an Americana star. Local guitar legend Lonnie Mack also hung around.

Drivin’ N’ Cryin’ followed rockers like “Chain Reaction”, “Around The Block Again”, “The Innocent” and “Look What You’ve Done To Your Brother”. Although it didn’t become a hit, the acoustic gem “Let’s Go Dancing” established itself as a standout. The lyrics of the song were evocative and open. Lines like “I stopped a freight train with a grain of sand” and “Let’s go dancing, said the firefly to the hurricane”.

Kinney used the phrase “let’s dance” on his “MacDougal Blues” tour. He and Peter Buck were raiding a bar in Baton Rouge. A fight broke out between some of the patrons, and a bartender about to go break it, said, “Let’s go dancing, enf—ker.” The lyrics were also inspired by the natural disasters Kinney had witnessed on TV and in person.

Elite musicians like U2 guitarist The Edge and roots-star Emmylou Harris have told Kinney how much they love “Let’s Go Dancing,” he says. “And I was like, ‘What am I missing about that? line up. His reasoning is that their current core have been together for about 20 years now.

Zep’s Jimmy Page – along with Black Sabbath’s Tony Iommi and Ramone’s Johnny Ramone – are Kinney’s three main electric guitar heroes. (His musical inspirations also include Elvis Costello and the MC5.) The title track “Fly Me Courageous” jumps with a very page-like jagged riffage. But Kinney was actually trying to play a version of Ray Charles’ R&B classic “What I’d Say” on guitar. Kinney’s translucent lyrics for “Fly Me: were about “standing up for people who aren’t celebrated.” At that time he was reading John F. Kennedy’s book “Profiles in Courage”, which also influenced some of the lyrical imagery. When the Gulf War broke out, “Fly Me Courageous” was adapted by many American fighter pilots as a theme song.

For the song “Build a Fire”, musical inspirations came from the original version of Brownsville Station’s “Smokin’ in the Boys Room” and Ted Nugent’s hypnotic rocker “Stranglehold”. The lyrics were a throwback to high school, touching on themes like growing up too fast. But Kinney’s “Build a Fire” observations are more authorial than nostalgic. “Because I was never able to participate in high school activities, because I weighed 300 pounds,” he says.

Sonically for the album, Kinney says producer Geoff Workman “knew how to make it sound. A lot of the volume in the studio was pretty close to live, and we really rehearsed those songs a lot, so they’re pretty tight as far as that goes. To this day, the vocals and crisp guitars on the “Fly Me Courageous” album still sizzle. However, Kinney cringes every time he hears the very 80s drum sounds washed down with reverb. However, 30 years later, the album “Fly Me Courageous” is holding up. The disc sounds particularly good in the car. This is great driving music.

The album went gold, making it Drivin’ N’ Cryin’s biggest seller to date. During the band’s gig at the Roxy Theater in West Hollywood, iconic Bad Company vocalist Paul Rodgers sat down with the band, including a blues classic “The Hunter.” They then shared a limo ride with Rodgers for a red carpet industry event.

Photographers on this red carpet were more interested in snapping shots of other attendees, like funk-rocker Lenny Kravitz and GN’R bassist Duff McKagan. “We got out of the limo and they took like a picture. Like, ‘click,'” Kinney said with a cheeky laugh.

The “Fly Me Courageous” tour includes a run supporting classic rock legend Neil Young in the amphitheatres. Backstage at a concert in Seattle, Nirvana members Dave Grohl and Krist Novoselic hung out and drank beers.

With the success of “Fly Me Courageous” came the inevitable backlash. “People treated us like sellouts,” Kinney said. “And to this day, a lot of people don’t give us a lot of respect because they feel like we’ve sold ourselves. But I was MTV for a summer. Relax.

Drivin’ N’ Cryin’ is touring as the opening act for ’90s blues-rock favorites The Black Crowes. Tonight the tour arrives at the Orion Amphitheater in Huntsville. Tickets are $30 and up (plus fees) via tix.axs.com. More info on drivinncryin.com. You can stream “Fly Me Courageous” on Spotify and other services.