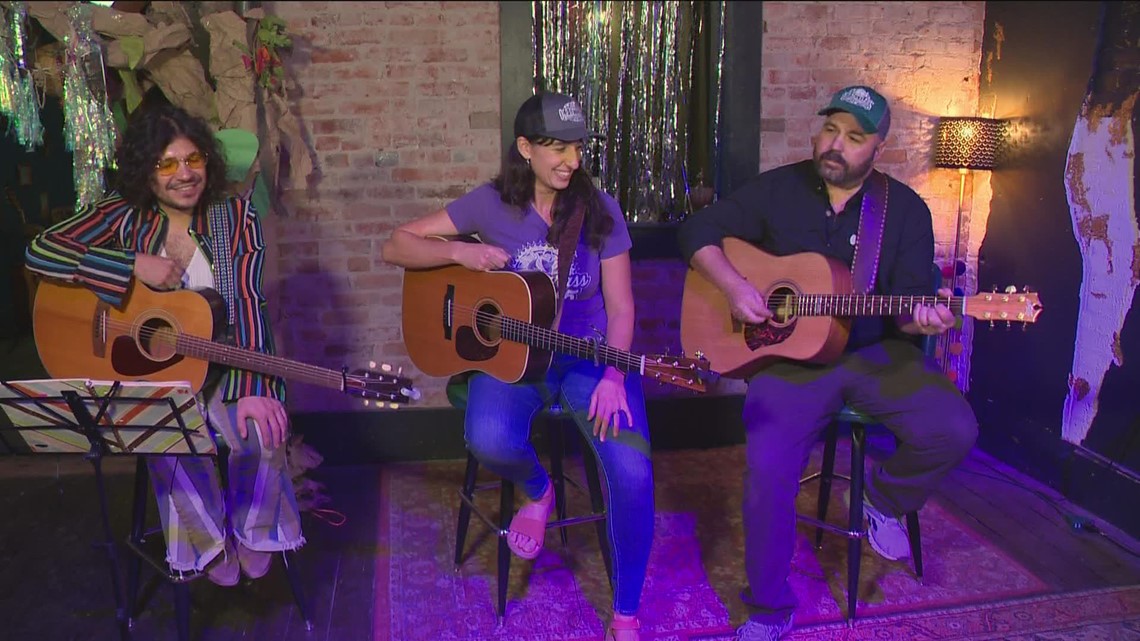 ‘I could stay here forever’: Growing number of musicians are leaving Austin and moving to Lockhart

The city known as the barbecue capital is becoming a haven for musicians leaving Austin. Why? Due to the laid back music scene and affordability.

LOCKHART, Texas – Lockhart is known as the official barbecue capital of Texas, but it’s quickly made a name for itself as a haven for musicians leaving Austin.

Although you can feel the chest in the air every day in the town square, you can also hear the strumming of a guitar. It’s a sound that’s becoming more common in the city as more Austin musicians are drawn to the small town.

“It’s a growing music scene,” said Chazz Bessette, who moved from Austin to Lockhart four years ago. “Other than that, it’s just a nice place. It’s a place where, you know, just like the cityscape, time stands still for a bit. There’s a little sense of permanence and nostalgia here.

It’s a sentiment that Bessette says reminds him of what the Austin music community was like before he left four years ago.

“There’s more time to be like, ‘We’re not getting out of this gig right away. We can just sit here and talk and really get to know each other,'” Bessette said.

Bessette said the reasons people move to Lockhart are the music community, the relaxed lifestyle and something else.

“Oh, it’s money, isn’t it,” laughed Bessette. “I would say almost every musician I know here left because of that, because of affordability.”

Bessette also runs the Sunflower and Friends music store and school in town, raising the next generation of Lockhart musicians.

“It’s really fun to see all these parents who want the torch,” Bessette said.

He said Lockhart is a place for everyone.

A growing number of musicians are leaving Austin for Lockhart🎶

Affordability and the laid-back, supportive music scene are two of the main reasons.

You’ll hear from the musicians below, all of whom have made the trip over the past five years. pic.twitter.com/1MOL0VICGo

“Well, I started in Liberty Hill about 20 years ago, and worked my way up to Austin when I could afford it. And then I moved further south when I decided I needed to save more money,” said Gabel, who moved from Austin to Lockhart five years ago.

But he said Lockhart’s music community gave him something money couldn’t buy.

“Maybe when you’re playing on Sixth Street, it’s all tourists coming and going and maybe leaving a dollar or two in the tip jar, and maybe not,” Gabel said. “But here, they are regulars. These are the same guys who come to ask for the songs, and they want to chat after the show, and they invite you over for a barbecue and to hang out in their pool or whatever, you know? So it’s a better community for sure.

More and more music venues are springing up in the city, such as Lockhart Arts and Craft. Gabel said he would rather play at those venues than move to Austin.

“Like, do I want to go to Austin, pay for gas, pay for parking, have an expensive dinner before the concert, and then worry about a parking ticket or whatever,” Gabel said.

But some musicians, like Talia Bryce, make the trip to Austin two to three times a week.

“The rest of my group, all four of them live in Austin, so it’s a bit awkward for all of them to come here. It makes more sense for me to go up there,” smiles Bryce, who moved from just outside Lockhart to Dale three years ago.

When Bryce isn’t playing in Austin with her band, The Lost Pines, she tries to bring more music to the Lockhart area.

“I’m the executive director of two different nonprofits, one called Farmgrass and the other is Old Settlers Music Festival,” Bryce said.

Both festivals take place just outside of Lockhart.

“I think people are looking for it,” Bryce said. “They love not having to travel to town to experience something really fun.”

These musicians are part of the new wave that is settling in the city, but they were not the first.

“When we started having live music here, we were innovating,” said JJ Grigar, who has lived in Lockhart for 47 years. “I mean, it was different for them. But it was nice for them too.

Grigar is part of the Lockhart Area Music Association, which started nine years ago to push for more live music.

“Right now everything is pretty much on autopilot, that’s where we wanted to be,” said Lockhart Music Scene’s Grigar.

Not only does it support Lockhart’s music, but it also plays it.

“My band is called The Fossils, as you can imagine,” he laughed. “The same five guys for 21 years.”

Although JJ always plays with the same guys, he is a big fan of new guys.

“With this last generation that came to town, they kind of just took the ball and started running with it,” Grigar said.

With one of the first waves of Lockhart musicians supporting the latest wave, these musicians said it was only fair to support the next.

“I can’t keep,” laughed Gabel. “I wasn’t native, you know. I moved here too. So if you guys from Austin want to come over here and hang out with us, come on, man. The door is open.

The gateway to a city where time passes slowly and moments can be cherished a little longer.

“You know, I could stay here forever,” Bessette said. “I hope I can. You know, I’d rather do this now.”

If they stay long enough, they may see a second music capital emerge.