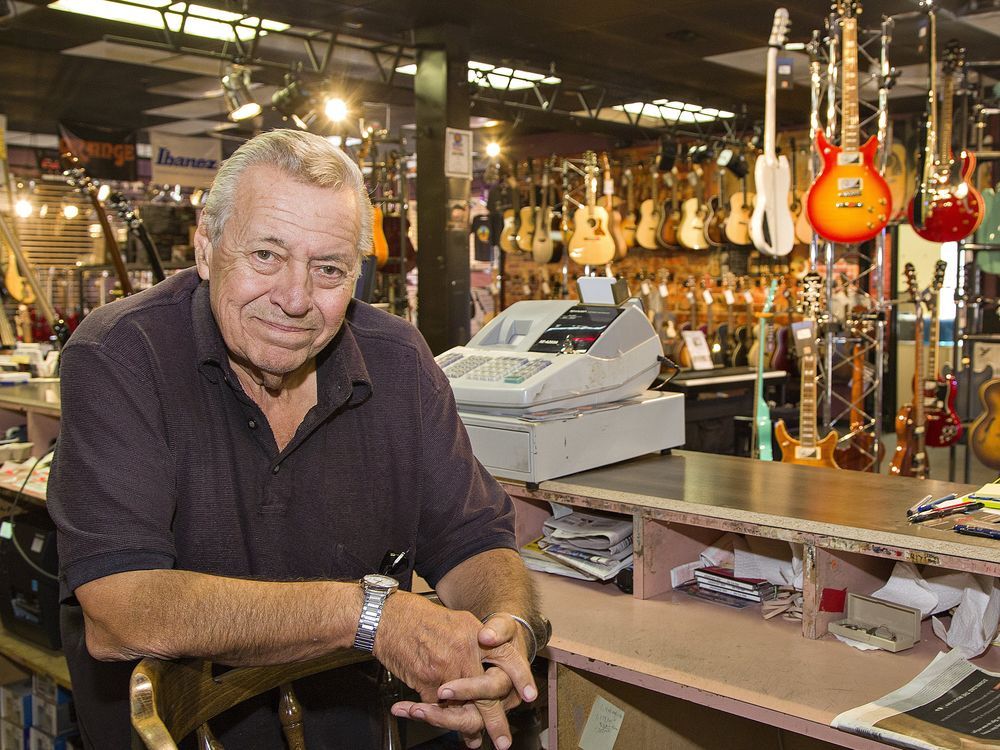 Pat Alonzo’s family say they have been overwhelmed by what people have said about the Brantford music icon since his death a week ago.

Like the story told by Brantford music school owner Darren Dsouza, who once sent a young trumpet student to the Pat Alonzo Music Shop, a municipal institution owned and operated by Pat and his family for 55 years.

Or the story shared by Scott Landry, who was a teenager when Pat let him pay for his first set of good drums “through some sort of layaway scheme.”

“When he saw that I was serious, he let me take my drums away before paying for them, allowing me to continue paying what I could, when I could. It was a small gesture that meant the world for me at 16. It has ignited my desire to play music for over 20 years now.

“There have been so many stories like that,” Marilyn Alonzo, Pat’s wife of 58 years, said during a small weekend family gathering around her kitchen counter. “Some of them we knew, but others we had never heard of. I was dazzled.”

“There were hundreds and hundreds of (Facebook) posts,” Pat’s daughter Angel Jansen said.

Pat was born in 1943, the eldest of four children who grew up in East Ward. He was about eight years old when he decided to take up the accordion. There are black and white photos of him as a child, smiling, the instrument almost as big as him.

“He got into it right away,” said Pat’s brother, Danny Alonzo. “It was common in those days to have house parties on a Saturday night and Pat was only too willing to entertain, me singing along.”

Pat was so knowledgeable that he started giving music lessons when he was 12 years old. His father, who was also Pat, liked to say that his son could make the accordion speak. Soon the family built a music studio on the side of their house.

By 14, Pat had become a professional musician, joining the dance group The Stardusters and, a few years later, The Sherwood Trio, a group that Danny said could play a “Polish wedding, a bar mitzvah or a ball. graduates”, with a mixture of old standards, Top 40, dance music and rock ‘n’ roll.

A big year for Pat was 1964. He and Marilyn got married and he opened his first store, Pat Alonzo’s Music Studio, where they offered lessons. He had no store stock, so he and his comrades would put their instruments in the store window, removing them when they had concerts on the weekends.

“We put them on every Sunday night, so we had something to show,” Pat said in a 2014 Expositor article.

When rock music started to boom, the Sherwood Trio was the first in town to play it, making it a popular choice for weddings and other local jobs. At the height of their success – they played together for nearly 30 years – the band had to be booked a year in advance, Pat’s son Chris Alonzo said.

The burgeoning rock scene was also good for business, and the store began selling instruments. In 1969 they moved to a bigger location in Cainsville, changed the store name to Lyrics and Alonzo’s Music and eventually LA Music. A move to their final location on Charing Cross Street took place in 1987. In honor of the 50 and anniversary in 2014, they renamed it PA (Pat Alonzo) Music Shop in a bid to get back to their roots.

The store has always been a family business. Marilyn took care of the accounting, Angel did some administrative work and took care of the printed music and books section. Chris came on board full time in 1993. His daughter-in-law Karen Alonzo, son-in-law Mick Jansen and their children also helped out.

Angel said his father had a huge heart, could be crusty at times, and was “funny as hell”. He was also an exceptional salesman.

“He was genuine but he could sell,” Angel said.

Local estate agent Harry Bazoian, who taught guitar at the store as a teenager and was a longtime customer, recounts the time he went to buy a piano music book.

“I came out with the book and expensive drums, and I’m not a drummer!”

Pat and Marilyn sold the store in 2019 to Long and McQuade Musical Instruments and retired. Chris remains there as store manager.

Pat died on January 24 at age 78 following an illness.

“He influenced generations of musicians,” his family says. “He will forever hold a special place in the hearts of his family, friends and community.”

Pat is also survived by her grandchildren, Nicole McConnell and Maggie and Ruby Jansen, her sister Judy Smyth and her brother Mike Alonzo.