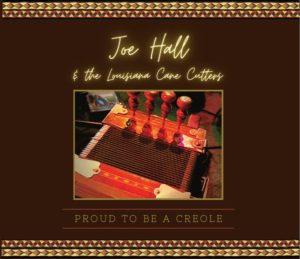 Years from now, artistic revelations will continue to surface from musicians whose performances were cut short during the great Roaring 2020s pandemic. Some, like Joe Hall, took advantage of the downtime to deliberately slow down and plan their art. The burly Creole accordionist has never planned an album as carefully as he did on Proud to be Creole, his seventh release. Yet it wasn’t until Hall played with the violinist Cedric Watson at the Swamp in the City festival on Governor’s Island in New York City that the final piece of the puzzle was revealed. At the airport on the way home, Watson asked Hall why he wasn’t on his next record?

Ask and you will receive. Watson did both.

Hall, who has always recorded with a violinist, was thrilled with the prospect. Hall, Watson, former Handsome Jock bassist Chuck Bush and drummer Paul Lavan traveled to Michael Lockett’s Lockdowne Studio in Houston to kick off epic, high-tension performances rooted in traditional Creole music, with every song performed in French.

It’s quite a contest of forces. Bush rolls tirelessly with a big, splashing sound while Lavan whips on his drums harder than a rental mule. Hall is a masterful accordionist, brimming with rich and precise ornamentation. Watson’s rustic-sounding Creole fiddle complements his conductor with proper rides and surf complements. Many tracks are roller coaster after roller coaster, except when the beat slows to a breathtaking waltz, such as Canray Fontenot’s “La Robe Barreé” and Beau Jocque’s “Chere Mignonne” (one of two Beau Jocque songs featured here ).

It’s hard to imagine a better selection of songs than the one Hall has crafted here, drawing from the Creole, Cajun and Zydeco repertoires. “Proud to be a Creole,” the crown jewel of the album, is an adaptation of Dallas Roy’s “Cajun from Church Point,” which is taken from Merle Haggard’s unintentionally hymn “Okie from Muskogee.”

Nuno Bettencourt has two new solo albums in the works