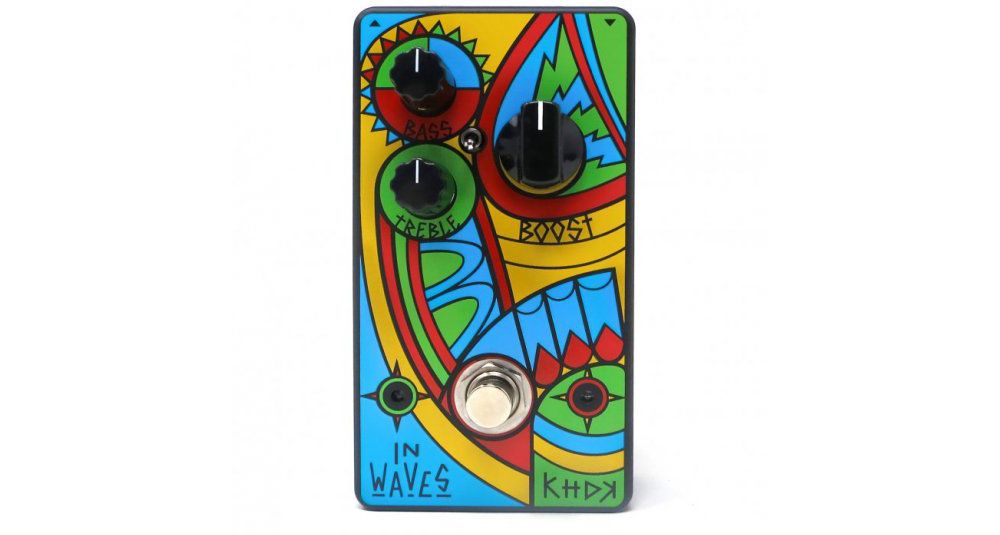 Now, less than a year later, the company has unveiled the In Waves Clean Boost Pedal, a colorful pedal that KHDK created with help from Trivium’s Matt Heafy and Corey Beaulieu.

Similar to the Ascendency and named after Trivium’s 2011 album, In the waves, the pedal is heralded by KHDK as its “craziest clean boost” ever. Its control layout is fairly straightforward, with knobs for boost, treble, and bass, and a tight switch right in the middle of the three knobs.

Boost controls the output volume, with the maximum setting giving a volume that KHDK warns as “Seriously. Loud”. The bass and treble knobs, meanwhile, are pretty self-explanatory, with a clockwise twist boosting them, counterclockwise cutting them and midi leaving them neutral.

The Tight switch controls the amount of bass in the preamp section, with the high position increasing bass response. The tight switch, KHDK says, is especially useful for those who have tuned their guitars, but want to preserve string clarity and definition.

The KHDK Electronics In Waves Pedal is a true bypass, operates on 9-18V power, and is available starting tomorrow (March 11) – in a limited run of 333 pieces worldwide – for $249. Each pedal comes with a certificate signed by Heafy and Beaulieu.

For more information on the pedal, visit KHDK Electronics.

Celebrate St. Patrick’s Day during Irish Week, plus other fun things to do around Seattle

Baseball is back, so what should the New York Yankees do?