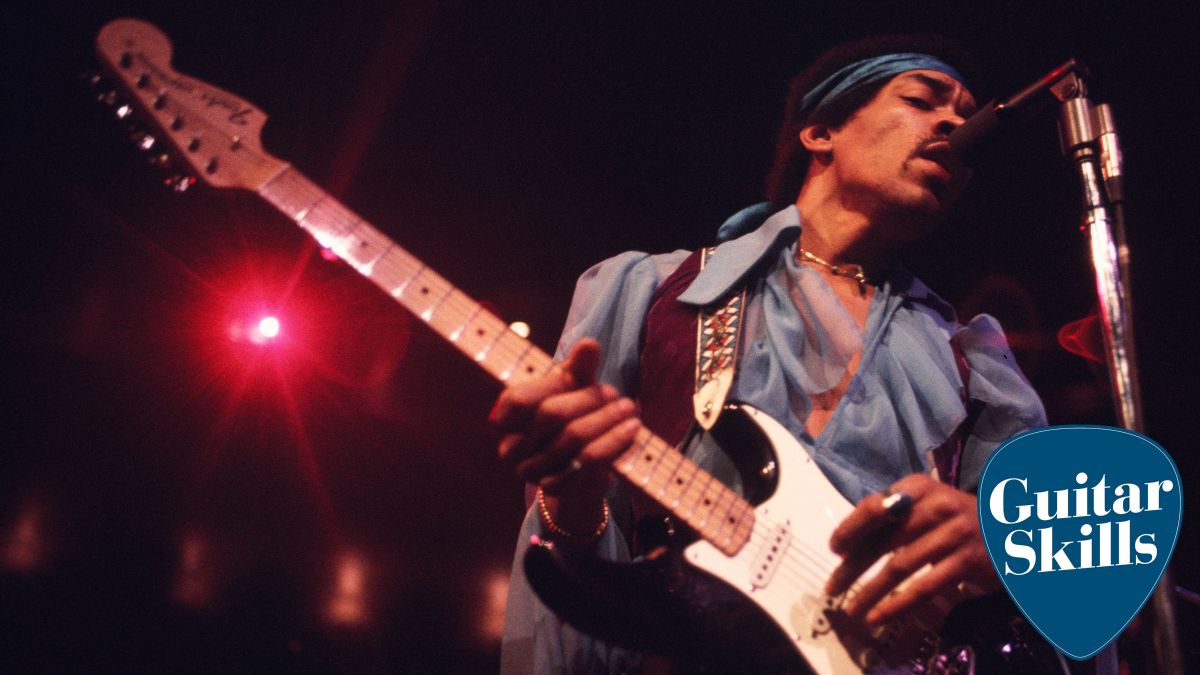 Welcome to our special two-part Jimi Hendrix guitar lesson. We watched Jimi’s main approach in detail and now we focus on Jimi Hendrix’s sometimes overlooked rhythm playing. There is a lot to learn here and we break it down into two general sections; clear and funk-rock rhythm.

Familiarize yourself with the basics of Jimi’s “thumbs up” and one-finger bar techniques and you’ll soon be playing classic songs like “Hey Joe”, “Bold As Love” and more.

Thumb bar chords on the neck

Classical guitarists may balk, but Jimi’s thumbs-on-neck barre chord technique allows him to position his fret hand so that those magical chord embellishments fall perfectly under his fingers. Just wrap your thumb around your neck to fret the sixth string instead of using your index finger to bar all six strings.

Try out the basic G chord first and hammer out the extra notes for a Little Wing or Castles Made Of Sand vibe.

Shape of the barre chord of the first finger

This three-stringed first finger barre is a key part of Jimi’s rhythm style. You just can’t play like Hendrix without this essential form. We’ve only scratched the surface with a few variations on the third finger here, but also experiment with your second and fourth finger.

Start with the one-finger barre and hammer the extra notes into C / E, Am and Cadd9 / G for authentic sounds in the style of Wait Until Tomorrow, Bold As Love and many more.

The thumbs-on-neck and one-finger barre techniques also apply to minor chords. Keep in mind that Jimi would often only play two or three notes of each shape – an idea that lets you ditch the occasional note you can’t easily reach and focus on fretting the more colorful extensions cleanly.

You might think there’s nothing too Hendrix-like in a G-Am-CG sequence, but Jimi’s rhythmic work turns that basic progression into a signature line. The first two chords in our example above, G (GBD) and Am (ACE), don’t share any notes but in bar 1 we added A, E and then C embellishments.

It’s an ear hook that hints at the two chords – and Jimi used to do that all the time. In bars 2 and 3 we involve both Am and C chords – you can even play these bars in the “wrong” order. The bass guitar pins it all down with root notes to keep you on track.

You’ve learned our G-Am-CG progression, now it’s time to try another of Jimi’s methods of navigating a chord sequence, this time with bass notes in passing, Hey Joe or Manic Depression style.

Black dots are root notes of G, red dots come from the G major pentatonic scale (GABDE), and green dots are “chromatic” notes coming from outside the key. Simply hit one of the chords in the progression, then experiment with the single notes to “walk” melodically to the next chord.

He’s arguably best known for his spirited, psychedelic solo guitar style, but Jimi has also played with so much groove. Let’s take a look at the more aggressively rhythmic side of the founding father of funk-rock.

Start by putting your fingers around those hard, edgy sounding chords and you’ll be halfway through nailing Jimi’s aggressive funk-rock styles. 7 # 9 is the big man’s most famous signature accord and can be heard in Purple Haze, Foxey Lady, Crosstown Traffic and more.

Jimi could play tight or loose and this riff is an example of both methods, mixing a Foxey Lady style groove with the more strummy chords of songs like Can You See Me. Maintain a stable sixteenth note selection motion, relax in the C # 7 barre chord and stay tighter on the F # 7.

Some of Jimi’s funkiest tracks have been performed with Band Of Gypsys. With a mix of partial chords, fret mutes, and single-note pentatonic lines, this sample tab will help you master the vibe of songs like We Gotta Live Together.