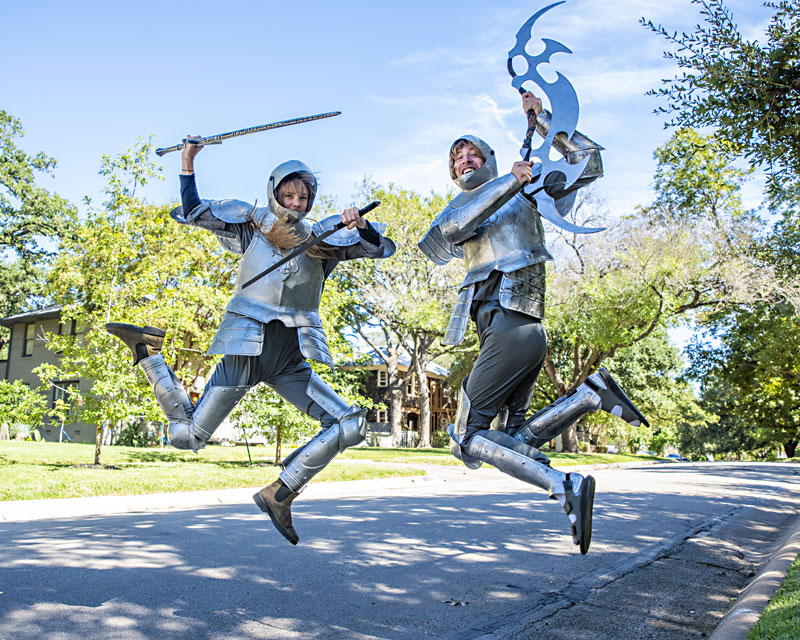 Medieval Times: Being Dead in an Era of Cruelty and Despair: The Story of a Real Band and a False Band in Two Acts – Music

The band hasn’t even finished checking the sound and they’re already getting heckled. The voice – thunderous and deliberate – comes from the back of the bar. There, at a cocktail table, a man sits alone except for the two cans of Pabst Blue Ribbon which keep him company.

It’s a night in early October at the Sahara Lounge. Juli Keller and Cody Dosier are on stage, but not under their usual banner of Being Dead – the adorably weird art-pop garage band that has become a modest attraction in Austin over the past four years. Instead, they booked the show as the mysterious alter-ego, Zero Percent APR, who has released two lo-fi concept records in the past seven months.

Where Being Dead has fans, Zero Percent APR has an enemy.

“Let the other Cody play the guitar!” He bellowed, after someone in the crowd announced his name was Cody too.

Bigmouth shit Keller and Dosier is wearing a gray T-shirt that says “Zero Percent APR Is Justâ€¦ Being Dead Light” – the last three words have been incorporated into a can-like graphic of Busch Light. It’s a plant – a showbiz term for an associate of the artist working undercover in the audience. It’s the kind of routine Andy Kaufman employed in the ’70s, when his writing partner Bob Zmuda would sit among the crowd saying his punchlines to drive the comedian into an apparent rage.

The schtick is pretty obvious to most of the three dozen people hanging out in Eastside’s eclectic musical hut, but for those who don’t get it, things heat up. A physically imposing guy in overalls who was doing a sort of interpretive dance in front of the stage charges at the back of the room to face the rowdy. Except it’s the wrong table: a group of rowdy football fans for a post-match drink.

The volunteer politeness officer explains that it is the 10th anniversary of the hall and that they are being rude by heckling the group. When the group categorically denies it, he orders them to “show who is yelling at the group.” They refuse to speak to the man sitting at the table right next to them, stifling a smile as he looks at his phone. After another customer arrives to defuse the situation and the man walks away, the rowdy and the football fans share a laugh.

On stage, with Dosier on baritone guitar and Keller on children’s drums (both sing and frequently switch instruments), Zero Percent APR performs a song from their recent medieval-themed album. Gilgamesh II. Dosier, with his He-Man-branded haircut, sings on “blood and bloodshed and burnt families“before their voices unite in a cartoonish mouse octave for crochet:”The dragons arrive at midnight!“

Although they may sound instrumentally primitive, the voice of Being Dead – or Zero Percent APR – is unassailable. With plenty of character, Dosier effortlessly oscillates between a childish upper register and an exceptionally low range that sounds like a slowed down band. Keller’s voice is strongly melodic and hungry for additional notes. Together they form a harmonic cohesion that can seem strangely psychedelic. Later, they cover “I Like the Christian Life” by another magical duo in close harmony: the 50s country gospel Kane-and-Abel the Louvin Brothers.

“Why don’t you write your own fucking music?” The loud voice in the deadpan in the background.

At the height of the show, Keller kneels in front of the stage, laying flower pedals on the distorted boards and singing the maternal “Moon Silver”, which sings a quality close to medieval Mazzy Star.

The hairs on the backs of all of our necks stand on end until the pregnant silence of the bar is broken by the rowdy.

“This one was actually pretty good.”

The room explodes with laughter and applause.

â€œWe want to tell the truth,â€ Keller tells me as I sit at a picnic table outside of Epoch Coffee on North Loop for a scheduled interview with Zero Percent APR. She and Dosier look at each other and take a deep breath.

“We are actually being dead,” they say in unison.

I try to put together a shocked expression.

“It’s a formal apology to everyone for lying,” adds Dosier guiltily. “We are very sorry for everyone we have hurt.”

I’ve been a fan of Being Dead since the summer of 2018, when I came to watch them play Beerland after they sent me a few weird emails. Back then, their stripped-down music and catchy, distinct songs reminded me of a weirder, rougher Violent Femmes. Their show included a part where they touted a terrific new musical invention: it was a 9 volt battery on a string, tied to a headband and they put it on the key of a synthesizer to play a sustained note, then Cody – wearing the blindfold – at one point in the song he would turn his head away to stop the note.

The following year, the vision of Being dead crystallized with Fame Money Death by Drive-By, a four-star EP blossoming on the contrast of disturbing lyrics and sunny psychedelic pop. Gradually their deliciously eerie performances – sometimes resembling the work of an improvisation troupe – became very popular and the addition of live bassist Nicole Roman-Johnston added sonic power. An upcoming batch of songs, recorded with Jim Vollentine at White Denim’s Radio Milk studio, is the band’s most impressive work.

Always, Gilgamesh II argues that Dosier and Keller’s material, recorded at home and just for fun, is as enjoyable as any Being Dead recording.

The debut release of their alter ego group, April’s Halloween-themed feature film Halbum, flew under my radar, but months later, Gilgamesh II impressed me. The title alone tickled me, positioning itself as a sequel to humanity’s oldest notable text. As a general rule, the longer the audience has to wait for a sequel, the worse the sequel. Take, for example, how the gutted critic Dumb & Dumber at (a fitting analogy because Keller and Dosier possess comedic chemistry similar to Jim Carrey / Jeff Daniels) was released 20 years after the original. Gilgamesh II now arrives about 4,121 years later The epic of Gilgamesh.

With its use of organs and mini skits, as well as an overall home-made feel, the 16-track collection somewhat resembles a Daniel Johnston pre-studio tape – except that it replaces love with a theme. ridiculous. Gilgamesh II begins with the couple recording a traveling podcast as they enter a portal and time travel to an era of cruelty and despair. “The Royal Three” serves as a silly musical theme for a trio of overlords who love – respectively – torture, kill and drink wine, while “Will You Storm the Castle with Me and My Horsey?” seeks a soul mate to overthrow the feudal system by his side. The most magical moment, however, is Keller’s plaintive anti-prayer “God is us”, which actually seems to have been written in the late Middle Ages.

â€œWe had to write these songs, then invent electricity to make a time machine,â€ says Dosier, as if the album’s premise was a real event. â€œWell, we made the time machine and then we were like, ‘Let’s make a tape machine now while we’re here.’ So we decided to record a few songs. Which was tight. “

Almost everything they tell me during the interview is a lie. Even the simple question of “How did you meet?” Arouses extreme disappointment. At different times they claim: A) They are foster siblings. B) They met in a video store. C) They met on the randomly matched, often masturbatory, video chat site Omegle. None of the above answers are true, so I turned it into 20 questions.

Were you childhood friends? “No.”

Did you meet in college? “No. I never went to university,” says Dosier. “I don’t play that shit.”

Did you meet as part of two people trying to start a band? “No.”

In 54 minutes of extremely unusable interview recording, the only factual information I could fathom was that Dosier grew up in North Austin and that Keller is from the Washington, DC area. At one point, they were both in an act called Creepo, which dissolved into Being Dead, and the reason they called it is because “it’s the most popular band name. metal we can think of “.

Oh yeah and they’re the best real-life buddies: the kind who can create together without any inhibitions, the kind where you know exactly what the other person is thinking, the kind who will always look out for each other .

â€œWe’re best friends,â€ Keller says. “Cody has a heart of gold, so you have to protect him. He gets harassed by people – that’s actually one thing.”

Dosier nods, “I’m being bullied by an adult.”

“I call him ‘The Lamb’ because people are going to come after him for who he is,” she continues. “They can tell he’s a loving, kind guy.”

â€œI think there’s one thing about being a big guy where people want to fight you,â€ says Dosier. “I guess I’m just giving off that energy.”

Keller stands in front of his bandmate: “So I’m here to protect The Lamb.”

â€œYeah,â€ Dosier said, lighting a smoke. “She is my protector.”

Being Dead – not Zero Percent APR – performs at the Vegas Hotel for Levitation Fest on Thursday, October 28 with the Nightmare Band of Nolan Potter, Pearl Earl and Post Animal.