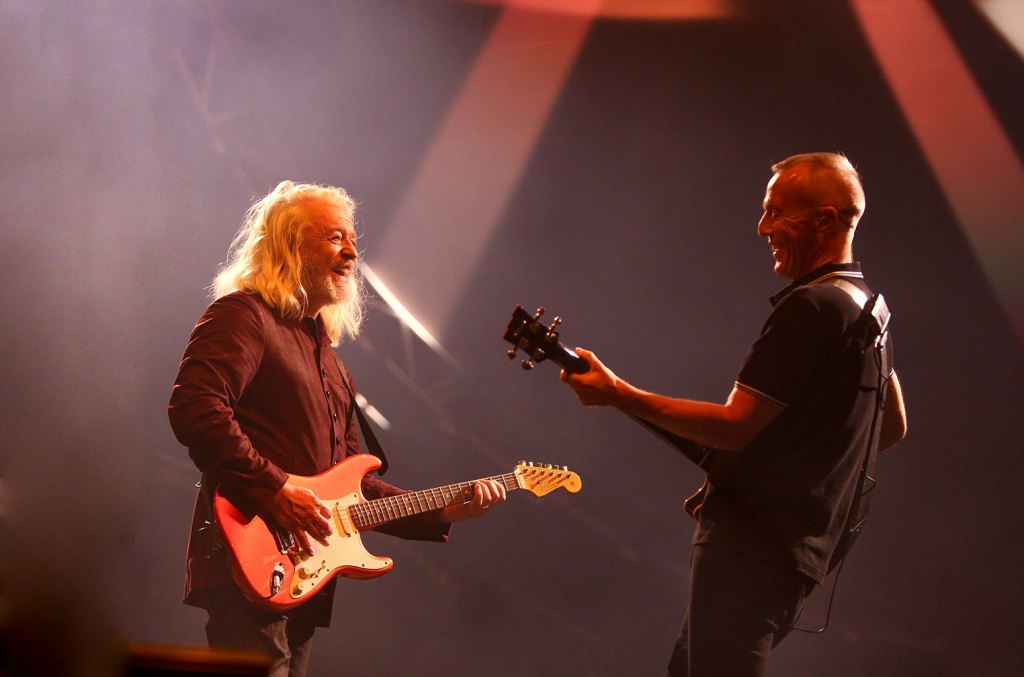 Tears for Fears frontman Roland Orzabal nearly cried halfway through the band’s set at the Kia Forum in Inglewood, Calif., on Saturday.

“Seeing you sing is amazing,” he told the audience during a series of new tracks. In the age of streaming, easy access to on-demand music means fans can tap into new music from their favorite artists of yesteryear. Still, Orzabal and co-founder Curt Smith seemed unprepared for the reaction.

“It’s very emotional for us,” Orzabal said after opening with the rootsy “No Small Thing” and the album’s hard-hitting title track.

The duo’s pride and confidence in their new songs was palpable throughout the evening. Seven of the set’s 19 songs are from the band’s latest album, The tipping pointa critically acclaimed and commercially successful collection of brand new material that shows the English duo remain creatively relevant 40 years after hitting the UK charts with ‘Mad World’.

After a trio of songs from their 80s heyday – the Billboard Hot 100 No. 1 hit ‘Everybody Wants to Play the World’s Part’ from 1985 songs from the big chair and 1989’s “Sowing the Seeds of Love” The seeds of lovewith the 2004 title “Secret World” between them – the band confidently returned to material from their first new album in nearly 18 years. Orzabal, now with flowing white hair and a scruffy beard, and young Smith seemed to have found a creative fountain of youth at 60. Both on record and on stage, the duo is full of energy.

“It’s good to get older, to get more mature,” Smith said in a moment of introspection before the band confidently embarked on a quartet of new songs: the soulful “Long, Long, Long Time,” aided by longtime replacement singer Carina Round, the supple “Break the Man”, the bombastic “My Demons” and the soaring “Rivers of Mercy”.

Many of Tears for Fears’ peers from their most successful era are decades away from writing captivating songs and performing on the one- or two-hit wonder-filled ’80s cruises. Orzabal and Smith are not a typical 80s band, however. Their US chart success extended into other decades: “Break It Down Again” from 1993 Elementary reached #25 on the Hot 100, and The tipping point reached #8 on the Billboard 200 album chart, tying The seeds of lovethe highest rating (and #2 on the Vinyl Albums Chart). That new generations of fans discovered the band over the years was evident in the multitude of generations represented by the audience. – it’s not just an old-timer act playing MTV hits of yesteryear. The current tour, which stops at arenas and amphitheaters, is a testament to Orzabal and Smith’s ability to craft artful music, as well as their on-stage chemistry. Both are skilled musicians – Orzabal on guitar, Smith on bass – and owners of remarkable vocals that remain resonant and supple.

On previous tours before the band went on a COVID-19 hiatus, Tears for Fears concerts typically featured around 16 songs from most of the band’s six previous studio albums and a cover of Radiohead’s “Creep.” At the Kia Forum and the previous eight gigs of the US tour, the band dropped “Creep” to make way for new material while retaining what became a cornerstone of their live performances. After Orzabal led the audience in a rendition of “Happy Birthday” for his wife Emily, Smith ripped into a thrilling version of “Mad World” from The injuryone of the band’s most famous songs – thanks in part to Michael Andrews and Gary Jules’ version of the Donnie Darko 2001 soundtrack and covers by Adam Lambert and Demi Lovato – and a concert staple despite never reaching the Hot 100.

The duo’s longtime touring band helped Orzabal and Smith fire up the crowd mid-set. Relief singer Round was mesmerizing in “Suffer the Children” by The injury and “Chained Woman” from The seeds of love. Guitarist Charlton Pettus, drummer Jamie Wollam and keyboardist Doug Petty were given the opportunity to shine in the blues and jazz infused “Bad Man’s Song” of The seeds of love. Pillar of the concert “Pale Shelter” of The injury only enhanced the band’s ability to move from American roots to the British new wave of its early days. “Break It Down Again” woke the crowd up again before “Head Over Heals,” which reached No. 3 on the Hot 100 in 1985, sent audiences into a frenzy.

“You’re making this homecoming hell,” Los Angeles resident Smith said, soaking up the crowd’s applause after the band returned for a three-song encore: “End of Night” by The tipping point“Change The injury and “Shout”, a 1985 Hot 100 No. 1 hit from songs from the big chair. After the band’s swing on the West Coast, the tour picks up Thursday night (June 9) in West Palm Beach, Fla., heads north to Chicago on June 16, and runs from Philadelphia on June 21 to Boston on June 22 before returning to Holmdel. , NJ, on June 24 and Jones Beach in Wantagh, NY, on June 25. A UK tour begins at the QEII Arena in Telford on July 1.

Finding the Used Car Amazon Sounds Like a Pipe Dream