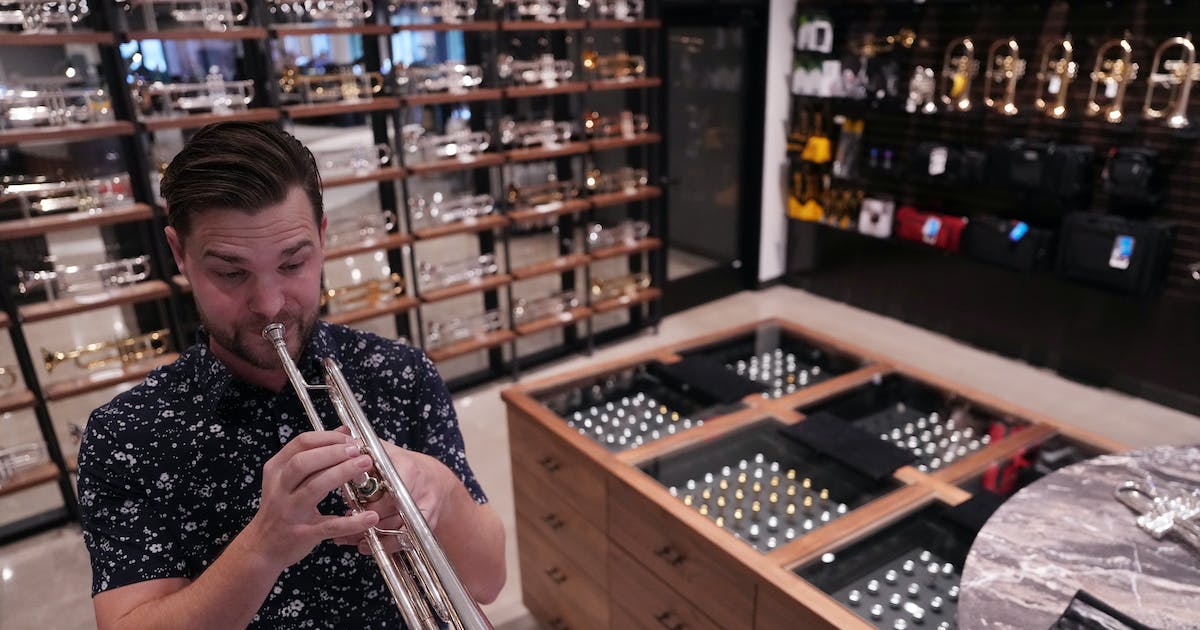 It’s not every day that you get to attend a recital by classical pianist Yuja Wang or listen to jazz great Hazel Scott literally play keys on the piano in front of you. But at Schmitt Music’s new flagship store in Bloomington, the musical possibilities seem endless.

The 125-year-old Twin Cities retailer opened a Willy Wonka-esque wonderland for musicians on Tuesday at 7800 Picture Drive, near the Interstate 494 and freeway interchange. 100 in Bloomington.

A $6.3 million purchase and subsequent renovation of a building formerly owned by Lifetouch LLC, the school photography company, allowed Schmitt to combine his office, warehouse, and instrument repair operations with a new retail store.

“Our passion is creating new music creators,” said CEO Peter Schmitt, the great-great-grandson of company founder Paul Schmitt. “We try to support music education…as students begin their journey in a fifth-grade band. Then as they progress, they have different needs.”

The store is divided into different galleries dedicated to various instruments. Each has specialists for that instrument, a test room for people to try out the instruments, and an area for repairs.

Its piano area includes a Steinway & Sons grand piano with the skylines of Minneapolis and St. Paul engraved. There are also Steinway Spirio pianos that have the technology allowing audiences to listen to performances played by great pianists and see the keys move as they play them. Spirio technology also allows audiences to enjoy live performances by faraway pianists.

Each of the instrument galleries has unique displays. For example, the brass shop features a floor-to-ceiling glass wall of trumpets, and mouthpieces are displayed in the center of the room in a case resembling one found in a fine jewelry store. Tucked into the corner is a tubas cabinet, one of which dates from 1908. Light streams in through the windows and glistens on the trombones. The mood in the saxophone room is gloomy; its leather sofa and Persian rugs evoke a jazz lounge atmosphere.

Not all galleries are complete yet due to shelving delays. But they should be ready for a grand opening event scheduled for December 10.

Once installed, there will be technology for musicians to virtual conference with instructors or others.

Schmitt’s business is advisory, which is why the new flagship store is so important, said Jeremiah Babcock, Schmitt’s vice president of sales.

“The instruments are still very tactile,” Babcock said. “Having a space where you can experience them regardless of where you are in this gameplay, that’s what those spaces are.”

The remodeling of the building, designed by Shea Design, includes a 124-seat concert hall accessible to the public. Several shows are already scheduled, including the start of a series of free saxophones next week. There is also a suite of private lesson studios.

“Our expertise is in creating great experiences for customers,” Kim Aune, director of Shea, said in a statement.

Along with the new space, Shea also helped Schmitt design a new logo. In the middle is the “S” for Schmitt, which is made to look like a treble clef with the five-line staff signifying the five generations of Schmitt family members who ran the business. Another hidden easter egg is the one surrounding the “S” is the sonic representation of the famous wall musical score from the former Schmitt Music headquarters in downtown Minneapolis.

The opportunity to redesign the corporate headquarters and business footprint presented itself when Schmitt’s lease for its location in the Southdale area expired. When Peter Schmitt, who took over running the business from his father, Tom, last year, came across the Lifetouch building, he said it made sense for him to combine the Brooklyn Center and Edina stores into a single space. Plus, it provided more space for business operations, he said.

“It’s a cool place,” said Peter Schmitt, as he toured the Bloomington store.

While he attests to being a poor musician himself, Peter Schmitt used his background in furniture design and woodworking to his advantage at Schmitt. He had his own business selling custom furniture and cabinets in the Twin Cities for about a decade before his father asked him to join the family business.

Eventually Peter Schmitt went to school to learn violin repair and restoration and joined the company in 2014, leading the development of its orchestral strings division.

Schmitt Music, which has a dozen locations, has continued to meet more than a century of challenges, said Peter Schmitt.

“Having been in the music business for 125 years, we’ve had downturns in the past,” he said. “During these downturns, people are still supporting music education because music brings joy.”