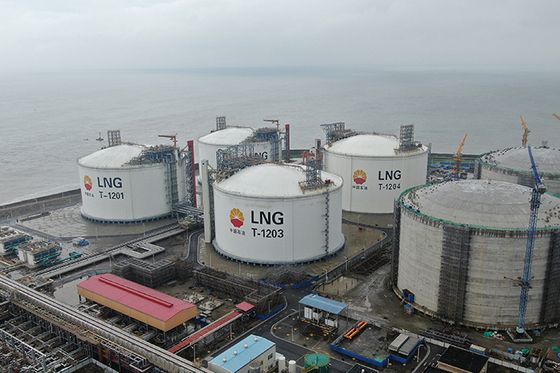 This was the first long-term LNG contract with an American company for Sinopec, also known as China Petroleum & Chemical Corp. (600028.SH), as well as the largest single LNG trade volume between the two countries over the past 10 years.

Chinese companies have so far signed more long-term contracts with foreign LNG producers this year than ever before, totaling 17 million tonnes per year, of which more than 5.8 million tonnes are in the United States. United. Next come Qatar with 5.5 million tonnes, Russia with 5.16 million tonnes and the London company BP PLC with more than 875,000 tonnes.

The total volume of long-term contract trading this year is a record, surpassing the 2018 figure of 12.4 million tonnes, according to a report by Huatai Securities Co. Ltd. (link in Chinese).

Long-term contracts are a common way for energy companies to secure their supplies and avoid incurring financial losses due to inflation. At the end of September, the prices of this fossil fuel reached a record level in a context of depletion of energy stocks and coal shortage. The Japan-Korea marker, North Asia’s benchmark for tracking LNG shipments, jumped to $ 34.47 per million British thermal units on September 30, the highest on record since 2009, according to Bloomberg report.

“Natural gas is essential for the country to meet its carbon reduction targets,” according to a document titled China Natural Gas Development Report 2021 (link in Chinese) by the National Energy Administration. It is also estimated that the country will consume between 365 and 370 billion cubic meters in 2021, a jump of about 10% from 2019.

Chinese companies have already been burned on long-term energy contracts. Sinopec and two other Chinese state-owned energy majors, PetroChina Co. Ltd. and China National Offshore Oil Corp. 2014 with a “take-or-pay” clause, which obliges buyers to buy goods by a certain date at the contract price, regardless of the development of current spot prices.

As a result, all three majors suffered huge losses when the price fell sharply. Price negotiations are only allowed every five or ten years.

These agreements also come after the Phase 1 trade deal between the United States and China that was signed in January 2020, in which China pledged to purchase at least an additional $ 200 billion in U.S. goods. Energy products represent about 26% of this total.

The last major long-term LNG deal took place at the end of October, when ENN Natural Gas Co. Ltd. has agreed to purchase approximately 900,000 tonnes per year from Cheniere Energy for the next 13 years starting in July 2022.

Executives from the three majors have all estimated that international natural gas prices will remain high this winter due to increased demand over the course of an oil forum (link in Chinese) October 28.

To download our app for getting late-breaking alerts and reading news on the go.

To have our free weekly newsletter must read.

You have accessed an article available only to subscribers

Spotify saw podcasting as a panacea. Instead, it generated a lot of costs.