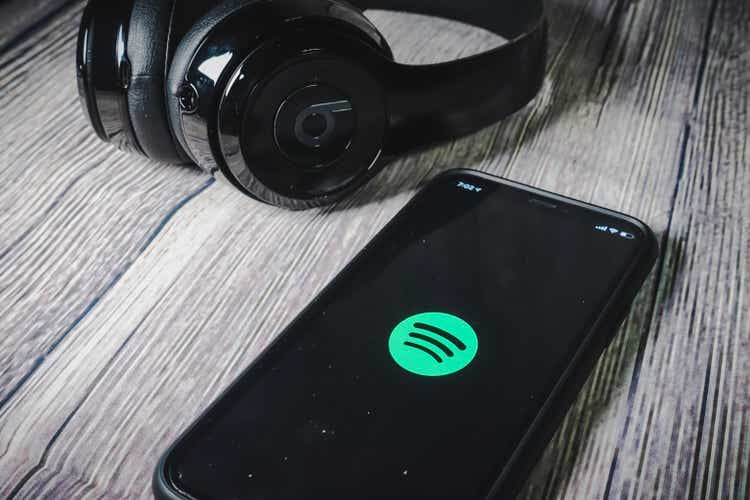 Spotify (NYSE: SPOT) is one of the largest music streaming services in the world and has grown rapidly in recent years. However, the company faces fierce competition with much more capital to reinvest in the business due to another rich core business. With inflation on the rise and artists likely to start demanding more money, Spotify’s competitors are in a much better position to do so without raising prices. Moreover, the platform has no moat in the music industry, and its only moat in the podcast industry is the platform’s content. When contracts start to expire, Spotify is likely to outbid competitors because they have a lot more capital to do so. The new Spotify Audience Network is being hailed by some investors, but it’s not an innovative idea and is similar to how YouTube already operates. With all of this in mind and the current price the stock is trading at, investors may want to reconsider before jumping into the action.

With rampant inflation across the country, those who rely on Spotify as a source of income are likely to demand a raise. This would be detrimental to the business because compared to its competitors, Spotify has very low margins. In fact, Spotify has the lowest gross margin and EBIT margin of the most popular music streaming companies.

Since Spotify has low margins and isn’t yet profitable, the company would likely have to pass those costs on to the customer and raise prices to stay afloat. On the other hand, Spotify’s competitors have big enough margins to take the brunt of inflation and not pass the increased costs on to the customer. This is the worst case scenario for the business as there is no moat that keeps customers with the platform. The most important factor for consumers when choosing a music platform is the price because almost all platforms have the same song library. Therefore, a consumer would not benefit by paying Spotify more for music than its competitors. Currently, Spotify, Apple Music (AAPL), Amazon Music Unlimited (AMZN), YouTube Music (GOOG), and Pandora (SIRI) all have premium plans that each cost $9.99 per month. If Spotify were to deviate from this without somehow rendering music to the exclusive platform, most consumers would likely switch to one of the other competitors.

During the pandemic, podcasts have become much more popular, while music has done the opposite. In the periods following the declaration of the COVID-19 pandemic by the WHO in March 2020, the consumption of music decreased by 12.5% while podcasts have grown in popularity as viewers shifted to more engaging content. This is where the growing popularity of podcasts began. In the United States, the podcast listener base has increased by 40% over the past three years, with 51% of consumers having started listening in the past two years.

Spotify has tried to capitalize on this growing popularity by signing some of the most popular podcasts to exclusive contracts and creating original content for the platform. For example, Spotify signed popular podcasts call her daddy and The Joe Rogan Experience to multi-year transactions with an estimated combined value of $260 million. This shows how Spotify is largely focused on podcasts as an important part of its future. However, other companies will see the growing popularity and also start to take interest in signing up popular designers. Spotify would have spent over a billion dollars on podcasts already and will continue to spend more. That’s a lot of money, especially for Spotify, which only has a total of $3.79 billion in cash in 2Q22. Compare that with Spotify’s competitors, and it shows the company will likely be outbidding for future contracts.

The situation already seems to be getting worse for Spotify’s exclusive content. In April, the The Obamas are gone from Spotify and are now looking to partner with Amazon’s Audible, iHeartMedia (IHRT) and others. Since this will likely happen to plenty of other exclusive content from Spotify, the company risks losing the only moat it has.

Spotify Audience Network shows its strength, but can be easily copied

The Spotify Audience Network, or SPAN, released in early 2021 and serves as a marketplace for advertisers to reach audiences through the company’s music and podcasts through its podcast distribution platforms. This is to diversify the company’s total revenue away from a large majority of subscription revenue and to capitalize on the fact that more Spotify users are not premium subscribers. This project appears to be very successful, as ad-supported revenue reached its highest ever amount at 11% of total revenue.

A key talking point about SPAN is how it enables better audience targeting for more effective ads. This is intended to make every podcast unique to each listener and change the experience of a radio show to one more like YouTube. However, this is not a new technology. As noted, YouTube already uses this type of advertising and there’s nothing stopping Spotify’s competitors from doing the same. Once again, Spotify’s huge competitors will have a lot more capital to invest in their own version of the program and will likely give advertisers more value. This could cause advertisers to eventually choose another platform over Spotify and depress company fundamentals.

Although the stock is down around 50% since the start of the year and many investors are keen to jump in, an assessment of the stock shows that it still has plenty of room to fall. Using the company’s average annual growth rate for revenue and FCF/revenue margin, I was able to project the company’s future free cash flow. For a discount rate, I used 8.5% because it gives a 5% premium over the average AAA corporate bonds, as well as a growth rate to infinity of 2.5%. After discounting the company’s future cash flows to today and dividing by the total number of shares outstanding, a fair value of $66.90 can be calculated for the stock, implying that it could fall by an additional 40.55%.

The biggest risk of this bearish thesis is that record labels take the hit of inflation instead of pushing it on Spotify. This means Spotify artists would see a pay rise from the record label instead of Spotify, and the platform wouldn’t need to raise prices above the industry norm. . Since Spotify is highly regarded by record labels, they may not want to risk their relationship with the company by demanding a higher salary.

For example, Universal Music Group (OTCPK:UMGNF), Sony (SONY), and Warner Music Group (WMG) consistently mention how music streaming, and Spotify in particular, are major revenue streams for all businesses. For Universal Music Group, the company consistently uses Spotify rankings to signify its success and growth. Recently, the company announced that Anitta reached first place on the Spotify World Chart. Sony also mentioned Spotify in its presentation of the musical segment to signify success, citing over 82 million tracks and 8 million artists on the platform. Warner Music Group also saw its streaming revenue increase by 10% in the second quarter of 2022 and placed several artists at the top of the Spotify charts. Since these labels clearly like Spotify, they may not want to hurt their relationship with the company and choose to take the hit of inflation themselves. If they do, Spotify won’t have to raise prices and won’t see an influx of users.

What does this mean for investors?

Although Spotify has been the longtime leader in music and podcasts, the company has no music moat and a temporary podcast moat. Since the company faces stiff competition with much more capital and higher margins, inflation could force Spotify to raise prices above the industry standard of $9.99. If this happens, consumers are very likely to switch to another platform because there is no music differentiation. When it comes to podcasts, the company has done well in recruiting popular talent, but as the industry grows and bigger players start investing, Spotify will likely outbid for contracts and it’s already showing with the departure of the Obamas. This will eventually cause the company to lose the only moat it has. Although the Spotify Audience Network shows strength, it is not an innovative idea and already exists in other advertising mediums, making it easy for a competitor to implement a similar program and offer better value to advertisers. With all of this in mind and the valuation showing that the stock has room for further decline, I think it is appropriate to apply a sell rating.