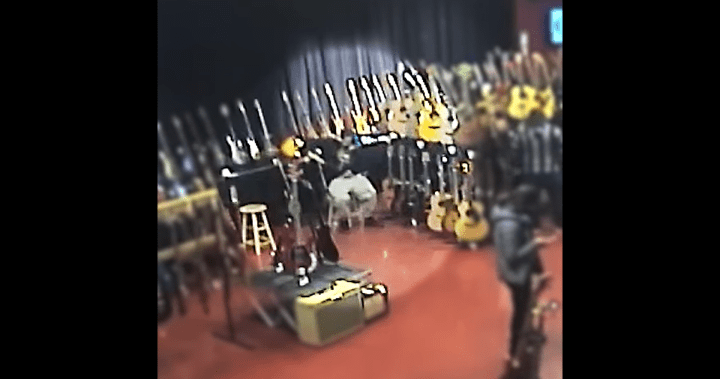 York Regional Police said they were working to identify two suspects after a guitar worth around $8,000 was stolen from a Richmond Hill music store.

Police said in a statement that officers were called to a store in the Leslie Street area south of Elgin Mills Road East on December 30 to reports of theft.

The statement said the alleged theft took place ten days prior – on December 20 – when an unknown man entered the business and stole a guitar by hiding it in his pants. He then reportedly fled the area in a vehicle driven by a second suspect.

Officers released suspicious footage on Wednesday and called on anyone with information about the incident to contact them.

Surveillance video was also released appearing to show the suspect stuffing part of the guitar into his pants.

One of the suspects was described as a man in his twenties who wore “extremely wide baggy pants”, a Toronto Maple Leafs baseball cap and a black coat.

Police described the second suspect as a man in his 20s or 30s wearing a black mask, black hoodie and sunglasses.

We’ve got a problem: getting your due: This week’s cover spotlights rapper J Soulja – Chronicles