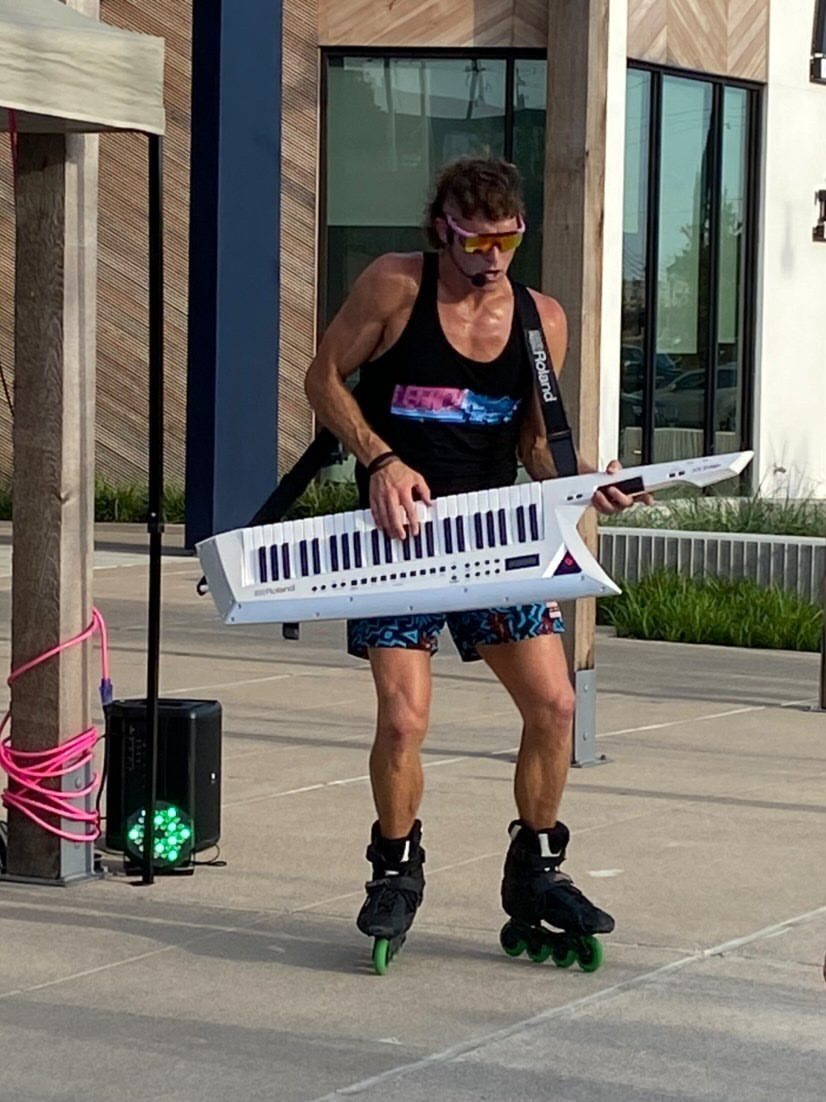 The impressive story of Legacy Man, the eccentric roller skating musician of the Heights

In early 2020, Heights citizens reported seeing an elusive man on inline skates playing a guitar, blasting music from a speaker and singing songs for passers-by.

Word has spread about the eccentric musician known as Legacy Man. Now, visitors to the MKT Sunset Market, which takes place every third Thursday, can see him perform his self-produced synthwave songs with original lyrics in English and Japanese.

Legacy Man, or Derek Cooper as he is known in his work as a chemical engineer, says his musical personality did not develop overnight, but was the culmination of a lifetime of personal development and curiosity. creative.

â€œIn seventh grade, I stumbled across a comic book store and found pirated Dragon Ball Z VHS tapes that were recorded from Japanese television,â€ Cooper recalls. “They were captioned and I was able to watch the show before it was dubbed into English.”

Tired of reading subtitles, Cooper used a tape and a set of books his grandmother gave him that taught Japanese phrases and he slowly began to learn the language on his own.

His adherence to the culture led to a love affair with Japanese rock music of the 80s and 90s. Cooper and his best friend Erik, both intrigued by the visual kei movement, decide to form a band.

â€œErik bought a drum kit, I bought a guitar and I learned to play on my own,â€ he explains. â€œWe finally started a garage band in high school with some friends.â€

After graduating from the University of Texas in 2009, he put down his guitar, entered his full-time engineering job, and chose a new hobby.

â€œI started doing fun triathlons and eventually IronMan competitions with my dad while working offshore. I learned so much about myself and strengthened my body-mind connection. ”

Cooper married in 2014 and the couple welcomed twins soon after. Spending more time at home, Cooper returned to his musical roots.

â€œI started tinkering with production software and making electronic synthwave music. Synth is a revitalization of 80s pop sounds and I had been listening to this music for a few years.

â€œI started making Legacy Man music in 2019 as a way to brainwash my sons to like the same music as me growing up,â€ Cooper says jokingly. â€œI had a drum machine, a few synths, and played guitar. In October 2019, I had a few songs that were pretty polite. My 2 year olds were having fits in the car, so I played one of my songs. They stopped, listened and nodded. Their reactions to my songs made me realize that I was on to something.

After rediscovering old roller blades he had received several Christmases before, Cooper strapped them up and Legacy Man took to the streets.

â€œI was skating on 8th Street and I don’t know what got into me, but I reached out and started singing my song in Japanese at the top of my lungs. It was so liberating, â€Cooper recalls. â€œFor months I sang, skated, took mental notes on the changes I wanted and had fun.

Cooper’s alter-ego has an undeniable ability to bring joy to others.

â€œAt the start of the pandemic, people were walking around with their heads down, and through my IronMan training, by maintaining a high mental and physical state, I became hypersensitive to people’s energy. I was skating in front of someone and felt the need to stop and sing and dance for them. I would stop to talk to them or just skate. I don’t know why, but singing and dancing in the streets made people feel happy. I started to feel like this is what I’m supposed to do. When I was in Hawaii to compete in the IronMan World Championship I had an experience in the lava fields where I felt something was going to happen. I just needed to trust my instincts and I would find the right path. I have the same feeling every time I step out on my skates.

Legacy Man was soon invited to perform at the MKT.

â€œI do a three-hour set with my skates,â€ says Cooper. â€œIt’s a question of endurance for me. For me to send energy and light, and for it to be real, it has to cost me something. I have to practice and put everything on the line for others and for myself. I keep moving my feet or playing my heart from 6 to 9 p.m. ”

Cooper emphasizes that his music is really meant for everyone. â€œEvery time I skate and have fun, it’s a natural joy. I feel like I have an abundance of something inside of me. By sharing it with others it maybe inspires them, or sometimes I am in deficit of this light and I can tap into their energy. There is a greater purpose [for Legacy Man] and I’m right here for the ride.