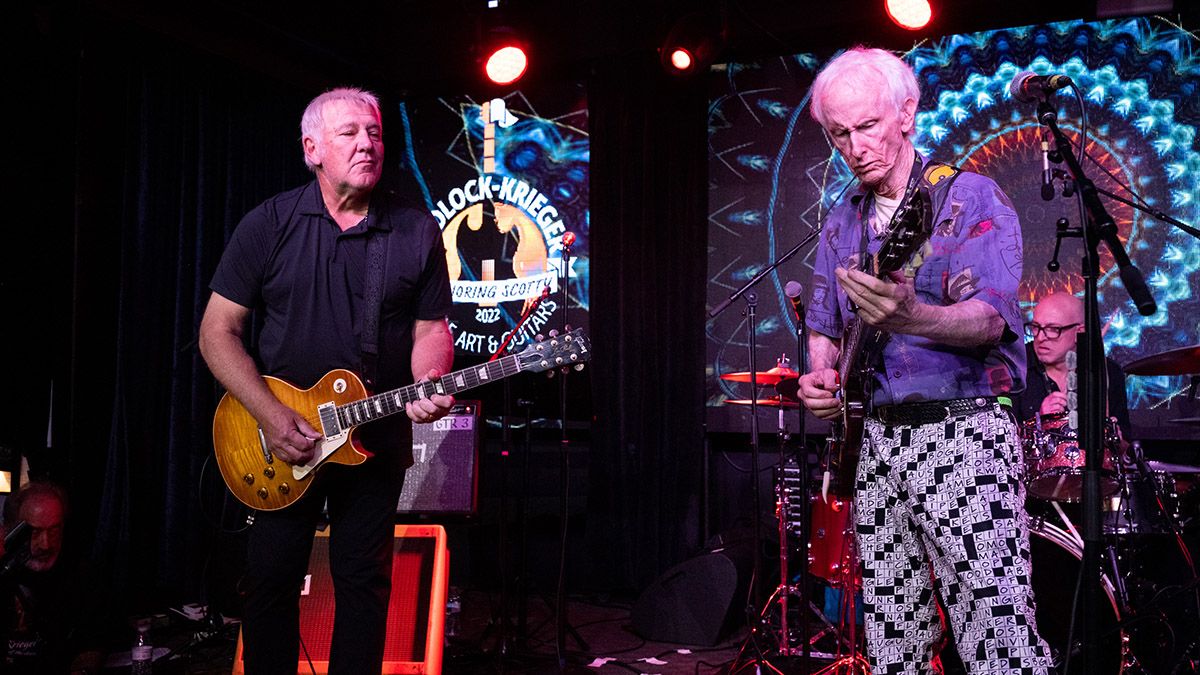 Robby Krieger and Alex Lifeson lit up the stage on Monday, October 24 at the Medlock-Krieger All-Star Concert when they joined forces for an epic performance of the Santana classic Evil Ways.

As in previous years, when Tommy Thayer of KISS, Lukas Nelson and Richie Sambora came to play, there was no shortage of big names on stage. The night saw the return of Elliot Easton and Orianthi from The Cars, but one of the highlights of the night – captured in the footage below – came when the Doors met Rush on Santana’s Evil Ways, with Krieger and Lifeson on guitar, and Andy Vargas of Santana providing lead vocals and tambourine.

With Lifeson playing a Les Paul, Krieger on his Gibson SG, the pair took turns on rhythm and lead. Krieger unleashes a fusion-style lead first before pulling out the slide halfway.

Other guests of the evening included former drummer and Chicago co-founder Danny Seraphine, singer Haley Reinhart and comedian Mark Eddie. But watch the video above carefully, there’s another Doors connection, with Dan Rothchild wearing the Joan Jett t-shirt and playing bass guitar. Dan is the son of Paul A Rothchild, who produced the first five Doors albums.

Speaking to Total Guitar in 2020, Krieger said the band were impressed with Rothchild at the time and considered him a mentor.

“We loved Paul,” Krieger said. “When I found out he was going to produce us, I was really excited. I thought it was amazing. In fact, he was my favorite producer way before The Doors, because I listened to the stuff that he produced when I was in high school, like the Paul Butterfield Band, the Even Dozen Jug Band and there was an album called The Blues Project that he did with all kinds of cool, unknown players – at least to us on the west coast. the Even Dozen Jug Band… He really helped us on the first three or four albums because we had never recorded before. He taught us a lot.”

The Medlock-Krieger All-Star Concert was the latest in a series of guest appearances for Alex Lifeson. More recently, the guitarist performed some Rush classics alongside Geddy Lee and Dave Grohl of the Foo Fighters at Taylor Hawkins Tribute Concerts, first at Wembley Stadium in London, then in Los Angeles. In August, the legends of Rush reunited to perform Closer To The Heart at a concert celebrating South Park’s 25th anniversary, with show co-creator Matt Stone playing drums.

Lifeson has also been busy with his Envy Of None project. Speaking to MusicRadar, he described the band’s self-titled debut, its first after Rush disbanded, as a “lifeline” that made him fall in love with performing again.

“I realized that with this project — especially in the last year where we really focused on it — for me, it saved my life,” Lifeson said. “It was kind of a rebirth for me. I got back to playing on a much more regular basis, I was looking forward to writing songs, I really wanted to do my best and be innovative in what I was doing.

“All of those things that have reignited my purpose in life have happened, and now I’m erasing the past from a lot of things in my life, and I look forward to the bright things on the horizon that hold my interest. It has definitely been the key for me.