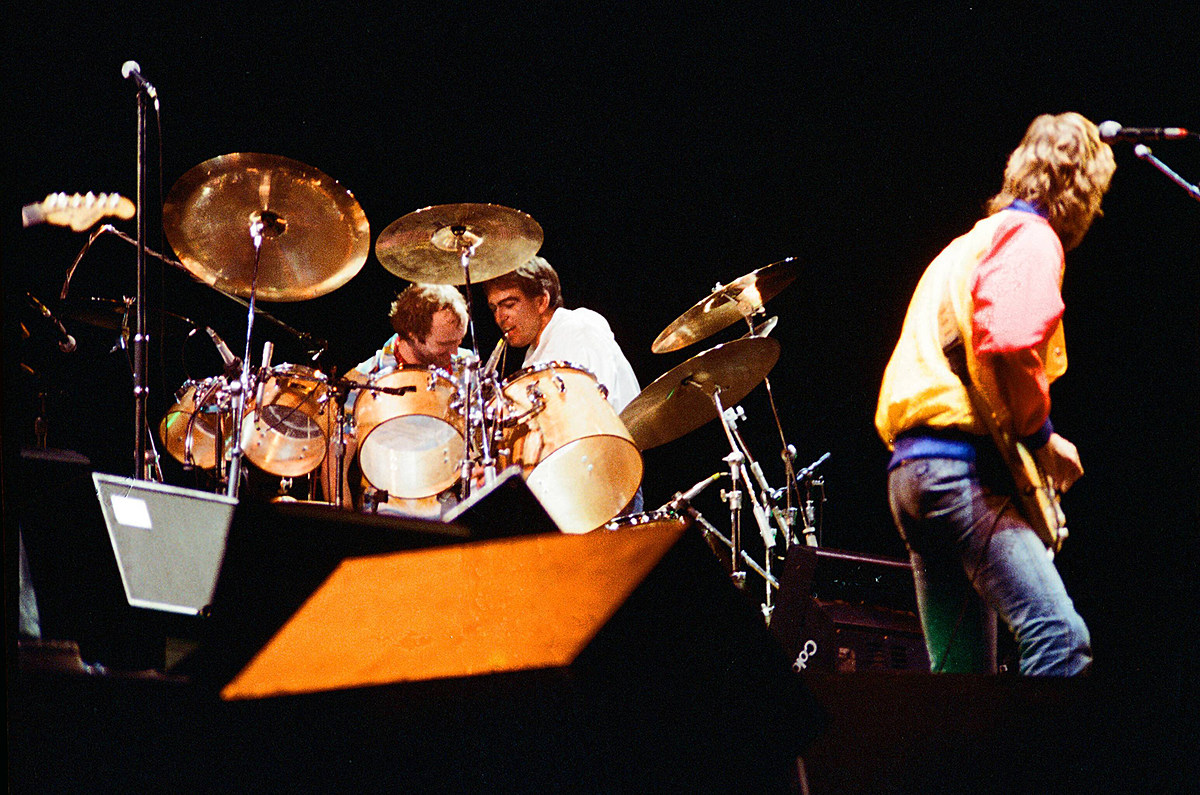 When Genesis Helped Peter Gabriel Escape Debt With The 1982 Reunion

Back in 1982, no one yearned for a reunion between Genesis and former frontman Peter Gabriel – except for the most hardcore prog fans.

It was mostly for the band itself. Genesis had blossomed into a bankable chart since the release of Gabriel in 1975: they had released two consecutive No. 1 albums in their native UK, including the previous year’s. Abacab. Meanwhile, Gabriel celebrated his solo freedom on “Solsbury Hill,” then struck a happy medium between art-rock and synth-pop on his recently released fourth album.

A financial disaster brought the two parties together, for one night only, in a concert dubbed Six of the Best. Presented on October 2, 1982 at the National Bowl in Milton Keynes, England, the show attempted to collect Gabriel’s debts after the inaugural WOMAD (World of Music, Arts and Dance) festival earlier that year.

Gabriel co-founded this event as a cultural melting pot: among others, the musical lineup included post-punk band Echo and the Bunnymen, Indian sitar player Imrat Khan, Irish folk band The Chieftains and the Drummers of Burundi. Several possible factors – including a railroad strike – would have made WOMAD more of an artistic than a commercial success, leaving behind a troubling record.

“Ambition outstripped reality,” said Gabriel The Guardian in 2012. “We went there with evangelistic fervor, and we thought everyone was going to be as excited as we were. It became a nightmarish experience when we realized there was no way to get the tickets to cover our expenses The debts were way beyond what I could handle but people saw me as the only fat cat worth squeezing so I got a lot of calls unpleasant phone calls and a death threat.”

With Gabriel unable to pull himself out of this hole, management came up with a clever idea: a Genesis reunion show doubled as a WOMAD benefit. A win-win, for sure. There were major hurdles, however, including the fact that Genesis was already on the road.

“When the idea of ​​helping him with a fundraising reunion show arose, there was no deliberation,” wrote bassist-guitarist Mike Rutherford in his 2015 memoir, The Living Years. “We immediately decided to carry it out, [but] since we were in the middle of a [40]-date UK tour ourselves, it was a logistical nightmare.”

They managed to hold two or three last-minute rehearsals – the exact number seems unclear – at London’s Hammersmith Odeon, where Genesis played on September 28, 29 and 30. 47,000 rabid fans (a figure singer-drummer Phil Collins cites in his 2016 book, not dead yet).

Due to a general lack of preparation, everyone involved held their breath. Additionally, Gabriel acknowledged the “generous” gesture from his bandmates, but wasn’t exactly thrilled to retrace his steps. “Having tried for seven years to move away from the ex-Genesis image, obviously there is some pushback,” he said. NME before the concert. “I don’t think they would choose at this point to work with me… [but] I’m very grateful and I intend to treat myself.”

Gabriel displayed this mix of excitement and apprehension with a wry visual stunt: After an introduction from Jonathan King, who produced the band’s disappointing debut album, Gabriel was carried onto the stage in a coffin, symbolically waving head to this ascent from the dead. (“Typically Pete, and typically dark and humorous,” Collins wrote, “but I’m not sure the audience [got] this.”)

But as the show’s bootlegs can attest, fans — now drenched from hours of heavy rain — at least understood the gravity of the moment, as Genesis launched into their final performance of 1974’s “Back in NYC.” (Gabriel, Collins, Rutherford, keyboardist Tony Banks, touring guitarist Daryl Steurmer and touring drummer Chester Thompson), this rendition is both surprisingly unique and a little disorienting: with Collins’ intense tom-tom flourishes , the liquid solos of Steurmer and the aggressive goat of Gabriel. bleating, he lives in an alternate reality – part 70s, part 80s.

Listen to a bootleg of Genesis’ 1982 reunion with Peter Gabriel

After part of the epic “Dancing With the Moonlit Knight,” which smoothly transitioned to fan-favorite ballad “The Carpet Crawlers,” the band was interrupted by fans singing “Happy Birthday” to Rutherford, who turned 32 that day. After acknowledging the moment, Gabriel turned his attention to the strange circumstances that had brought them together.

“Some of you might be wondering what we’re doing here,” he said. “It’s actually footage from a previous event by the name of WOMAD. … The end result was that it was a great event and lost a lot of money. But I have very lucky to have a group of people [to] support these ideals. … And in exchange for your money, we’ll try to give you what we think you’d like from that combination.”

Those who withstood the downpour witnessed Genesis history with nearly every song. The set list was inevitably inspired by the band’s Gabriel era, and many of those selections have never been replayed – including a full version of the 23-minute epic “Supper’s Ready” and Lamb goes down on Broadway deep cuts “Fly on a Windshield” and “1974’s Broadway Melody”. They also took the opportunity to experiment, playing a lighthearted version of Gabriel’s “Solsbury Hill” (ironically, given the meaning of the song) and Genesis’ 1980 single “Turn It on Again”, the latter featuring Gabriel striking at second battery.

“Pete suddenly decided he would play alongside Chester on Phil’s kit,” Rutherford wrote in The Living Years. “Like everyone else, what Pete didn’t realize was that ‘Turn It On Again’ was on 13/8, which made it a ride: he thought it had come to the end and suddenly We would’ve left. He spent the whole song trying to find that one, but I’d rather someone put in some passion and make a mess than get a perfect note. Also, as a band, we rather enjoyed those times when someone screwed up.”

The most significant moment of the set came during the encore, when former guitarist Steve Hackett, who left Genesis in 1977, joined as a surprise guest for two classic songs, “I Know What I Like ( In Your Wardrobe)” and “The Knife”. He had learned of the reunion while on vacation in Brazil, after his father called him to tell him the news: “The next day I came back to the UK and flew to join the guys for the show,” he wrote in his 2020 autobiography. A genesis in my bed. “As they had already rehearsed their stuff, I was only able to join the encores, but I was thrilled to be involved with the team again.”

Everyone seemed to feel the same – except maybe Banks. He found it a ‘strange’ experience, according to the book Without Borders: The Life and Music of Peter Gabriel“I was wearing a tracksuit that had ‘kamikaze’ written on it, which emphasized my attitude.”

Gabriel never found Genesis again, at least not on stage. He recorded new vocals for the 1999 version of ‘The Carpet Crawlers’ and took part in several interview projects – including the 2014 BBC documentary ‘everything in the same room’. Genesis: together and apart. He and Rutherford also appeared at a Hackett solo show in 1983, performing a charming, unrehearsed version of “I Know What I Like”.

Looking back, Rutherford’s biggest regret about Six of the Best – echoing the sentiments of so many fans – is that they didn’t document the night for posterity. “It wasn’t until later that I realized how great it would have been to have a recording for the fans,” he said, “and also how special it all had been to me. personally too.”

Steve Hackett released one of rock’s most hated albums