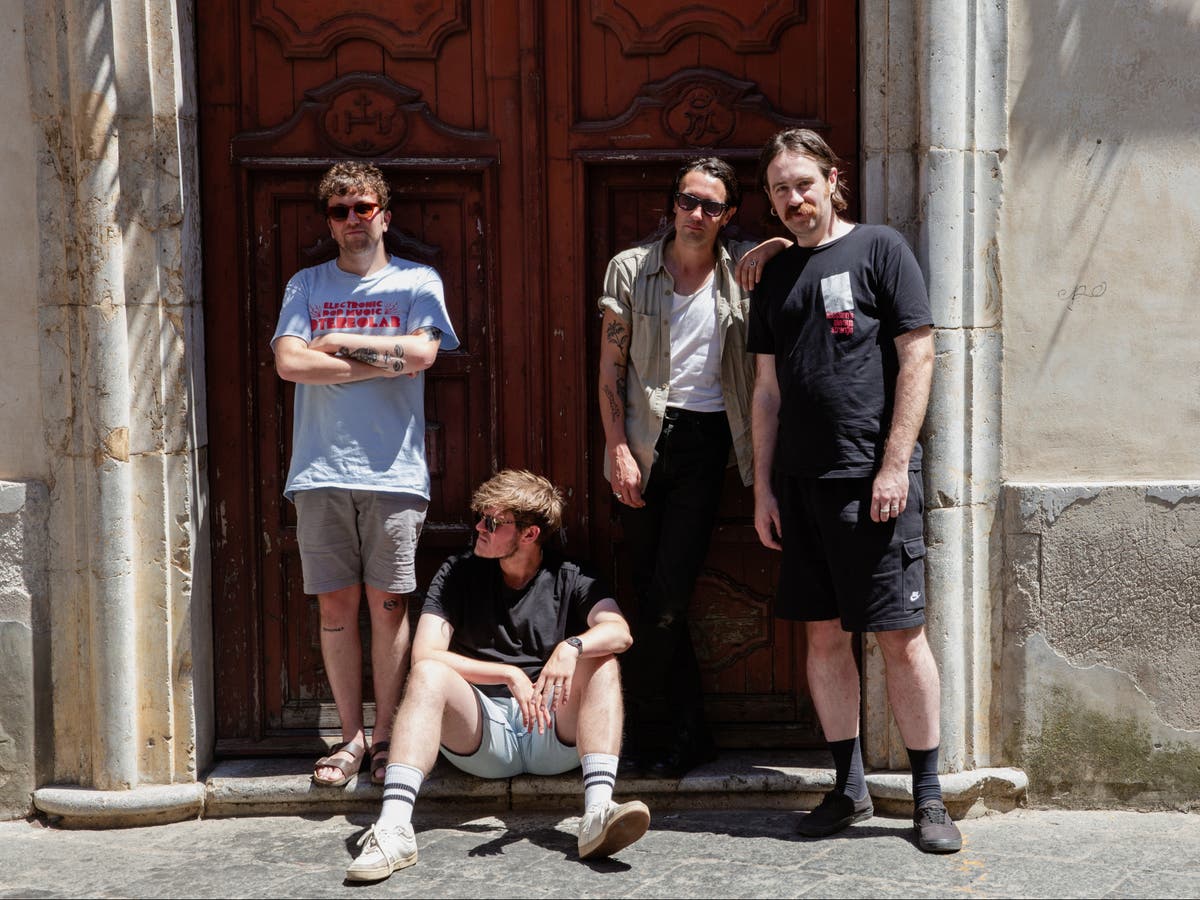 IIn an interview last year, Yard Act frontman James Smith explained how his band had “Trojan horse” in the music industry. The Leeds-formed band snuck up the charts in 2020 amid a cavalry of post-punk acts. The first singles – the juddery “Dark Days” and the stomping “Fixer Upper”, with its funky guitar bursts “Fame” – saw the quartet (completed by Ryan Needham on bass, Sam Shipstone on guitar and Jay Russell on drums) grouped with London bands such as Dry Cleaning and Black Midi. Avid comparisons have also been made with Sprechgesang (spoken song) populated by IDLES, Sleaford Mods and Black Country, New Road. But Yard Act’s wry yet good-humoured take on post-punk always had that extra dose of salt, Smith’s tongue firmly in cheek.

“It’s weird, I feel like there were a lot of good reviews for the debut album that I didn’t agree with,” the 32-year-old says. It refers to their excellent debut Overload, released in January and shortlisted for this week’s Mercury Prize. “A lot of people seemed to have a bad impression of us, but still praised us. I felt like they missed the angle I was coming from. They thought it was a ‘state of the nation’ thing, anti-Brexit, anti-Tory.” He reclines in his chair at a restaurant in Sicily, where Yard Act is performing as part of the Ypsigrock festival . “grazie”, he says to the waitress who is clearing her plate, with a passable Italian accent. ” It was good ? he asks, then puts on his best Westminster Boys’ School voice: “I do a really good northern accent too.”

The hot northern slur returns as he chats with Needham. They’ve been friends for years, met at a party in 2013, then went into orbit while playing in their own bands – Smith’s Post War Glamor Girls and Needham’s Menace Beach – and bonded around pints at the pub. The idea for a new band was floated and in 2019 Yard Act was born.

Overload is a stretched spring of a record. Its 11 tracks are bursting with energy, treating Smith’s shrewd lyrics with Swiftian (Jonathan, not Taylor) rhetoric about traditionally unsympathetic characters. Listen and you might find yourself not sympathizing, but at least listening to them instead of dismissing them altogether. Smith grew up listening to choppy Sheffield rock from the Arctic Monkeys in his hometown of Lymm, Cheshire, and clear riffs on Alex Turner’s early habit of romanticizing the mundane: bickering couples, fights in the bars, sleaze from the ritz to the rubble. “[Arctic Monkeys] and The Streets are the two bands that made me realize that I could write about what was around me, make it romantic, find beauty in normal surroundings, and realize it was exotic for someone else” , he said.

Elsewhere on the album, it reckons with an innate selfishness that seems to pervade much of post-Brexit Britain, as well as a stubborn refusal to face our own history. “Though there’s beauty in all a truth / The gnarled roots of a shameful past, will never let it be,” he sings on “Land of the Blind.” Even the instrumentation has a suspicious quality, thanks to the brooding bass lurking beneath the band’s bizarre harmonies. “I think all of modern Britain is a blockade of colonialism,” Smith says. “We have never faced our past head on.” We speak the same week as Tory leadership candidate Rishi Sunak says he wants to punish anyone who “vilifies our country”. Smith frowns. “It’s bananas. I can’t put my head on it. Education, he thinks, is one of the biggest problems: “We don’t teach children in schools what our past really was. Until we frankly acknowledge that we profited from the slave trade and colonialism, we will never understand why we are – he corrects himself – “we were a rich nation. We will never understand.

Critics were pretty impressed with The overload to nominate it for this year’s Mercury Prize, alongside records from rappers Little Simz and Kojey Radical, indie-rock duo Wet Leg and, uh, Harry Styles. Smith was unable to make the shortlist announcement in London as he was in Doncaster caring for his 18-month-old son, Huey. Needham ended up doing the press interviews – he enjoys them but struggles to provide so much information about his teammate’s words. “I don’t know man, I just play bass,” he laughs. “It’s not like I wrote socialist bass lines.”

They feel some pressure to act as ambassadors for Leeds, but like to flirt with the tropes that go with it: “It’s fun to play with, and it’s an inherent part of who we are,” Smith says. One of the most notable examples of this transpires on “Rich,” where he sings, “Skilled lay-buuh in the private sec-tuuh.” It was bait for critics looking for blatant nods to Mark E Smith and The Fall. “There’s stuff on the album where we deliberately recorded more lines to make them sound more like that, to get people excited,” Smith says, with a smile. Yet they still ended up with a few music video directors who took them at face value when pitching ideas: “They were all like, ‘OK, you’re from the north, so you’re in a social housing estate. , you have flat caps housing, there are pie shops…’ and it’s like, no, you’re wrong! Needham said.

Smith met his wife, a mental health nurse, in Leeds (“a 4am kiss in Bad Apples”). Needham moved into their loft for a few years when he had to move out of his house: “We pretty much shared you guys,” Smith says fondly of his bandmate. “You did all the things I didn’t like doing, like paying for brunch – you kept taking my wife out for brunch. And she doesn’t particularly like staying up until 4 a.m. drinking cans and writing demos. It was his wife who explained to him how intrusive thoughts can manifest themselves in dreams – much of Smith’s writing moves in and out of a more subconscious realm, where familiar characters are given an abstract advantage. He always had a wild imagination – his father, a former pawnshop manager now a bus driver, gave Smith his love of books, reading The Hobbit to him as a child to hand him a copy of On the Rod when he dropped him off at the university. “It’s a good egg,” Smith says. “It changed my life in an interesting way.” He saw his mum recently and says she listed “about 20 things from the album that she thought were references to growing up. She’s convinced I’ve written a lot more about my own life than I realize. .

The ice in our drinks has long since melted – it’s too hot for Smith to wear his trademark trench coat for the show. It started out as a trope too, until he realized he liked wearing it. “The first gig we did, I wore it as a joke, and the pictures came back and I thought, I look pretty good! It’s become a bit of a wrapper, a stylistic thing he said. “It’s requisition. And rustling. Apparently there’s a song on their second album called ‘Trench Coat Museum,’ about Smith’s own ego. It’s something he fought “quite a bit,” amid growing notoriety and everyone having their own opinion of the band. As long as it’s not just another record about “being a new dad and finding out is to be responsible,” I said, quoting a press release. “Uh, the second album is about fatherhood…” Smith says, as Needham laughs. “No. It’s a concept album. on a roadie for U2,” he continues, smiling. “I’m going to play chicken with you and see if you put that in…” Another Trojan horse? Who knows.